By News Staff on October 20, 2013 in Government Agencies/Utilities 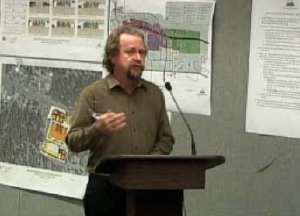 When the Mammoth Town Council met last Wednesday night, the future of the iconic landmark, the Green Church, came up. Dan Dawson, Director of the 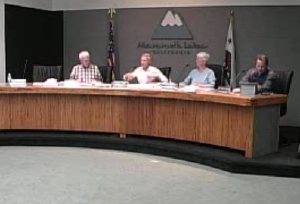 Valentine Reserve and Sierra Nevada Aquatic Research Lab, works for the University of California which bought the Green Church in 1987. Since then, issues with Mammoth Yosemite Airport have caused the University to think about transferring the Church to someone else.

Dawson explained to the Council that a 2001 proposal to expand the airport included expansion of what’s called the Runway Protection Zone, which takes in the Green Church at the corner of Highway 395 and Benton Crossing Road. One of the rules prohibits public assembly, the only use for the Green Church. Back then, Dawson had negotiated with the Town for money to build a replacement for the Church. Of course, airport expansion was scrapped, but Dawson said the potential for future impacts has not gone away.

Dawson pointed to the future possibility that Mammoth’s airport might be re-classified and then the same problem would exist for the Green Church and for the Town. Dawson said he has designed a new lecture hall and classroom for the main campus and has funding lined up for the $1.5 million project which will also be open for public use. However, Dawson said the lessor for the Green Church, the Department of Water and Power, has said the University needs to figure out the disposition of the Green Church before moving ahead with the other project. 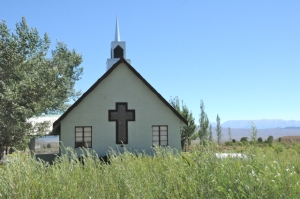 Dawson said the Town has two DWP leases in the Whitmore area and could easily make the church part of that. He said, “I’m trying to sell you a used car. The Town could buy the building at a token cost and solve my problem.” Dawson said it would also solve Mammoth’s future problem when the airport expands.

Town Manager Dan Holler said he needs more detail and will get that together to bring back for an agenda item in November. Dawson pointed out that it would “likely be a political nightmare if we have to tear down the Green Church which has become a local landmark.”

Was I right about the brand turning into Big Bear ahh yeah. Its funny how people cant generally listen or read. I am sure we are all of that guilty too. My own personal goal is to start listening better. God bless theres a lot of good people in this… Read more »

There are some sad replies here. The first reply was correct. The Church belongs to God. There is no need to tear this church down. The community just needs to agree to move it. It should not be destroyed, just re-sited. If you have no volunteers, then I will come… Read more »

I think the green church is a good landmark for people looking for the dump.
And as for future airport improvements, I’d like to build some condos around it, What do ya think Major,time for another agreement? =

Nancy, I wish that I could put flowers in my hair and run around the forest too. I think that your suggesting that MMSA and the town of Mammoth Lakes can speculate on the future of the mountain and the people that live and work there on tourist that visit… Read more »

Why wouldn’t the rational vacationer with room in their car stock up on all the essentials at the lower prices one finds in a major metropolitan area? And when did that become a recent trend? The last run to Tahoe involved packing every open space in the car not occupied… Read more »

Mr. Tortoise, that’s a great story! And there is not one word or sentence that could not be more true or correct. It was a better world back then. The problem is this though, after reading your paragraph if I was trying to raise a small family or start a… Read more »

That One Guy
Reply to  Gib Corwin

Hate to break it to you Gib, but “putting flowers in our hair and running around the forest” is what people come here to do. The most successful companies in the modern world that most of us are living in have logos that some might say look like they were… Read more »

Move it to the Village and turn it into a pub.

Ken, I am laughing my ass off. Thanks!

gib corwin….surely you miss what makes Mammoth such a beautiful place and it really has nothing to do with any of the things you mention. Without the stunning mountains and spectacular outdoors the town, the village, the MMSA logo would have not have much of a purpose. 20 years from… Read more »

Do you think the future tourist dollars ( the skiers/ boarder kids) will remember Mammoth when they make vacation ski plans twenty years from now? That poor town has about as much charm as Pearsonville, and that’s when the town is covered in snow. The hot creek is closed, the… Read more »

“The MMSA logo looks like a phone number someone wrote down on a cocktail napkin in a dimly lite bar in Mojave.”

I will have you know now that Mike’s is closed in Mojave there is no place to buy a cocktail in Mojave.

There is the appropriately named High Winds Lounge on Hwy 58 and I believe you can get a drink out at the restaurant at Mojave Airport and at the Mariah Country Inn.

Wow,,, that is a landmark in Mono County. It would make me very sad to see it torn down or something.

Another conflict of interest?

“The Town could buy the building…”

This wouldn’t be another property listed by Matt Lehman would it?

do what Dawson says. He’s the smartest guy in town. Including Rusty

What would God do?

Trouble, you do make me laugh sometimes.
BK