The young Great Blue Heron fell from her lofty nest in the rookery near Wye Road on May 16th. 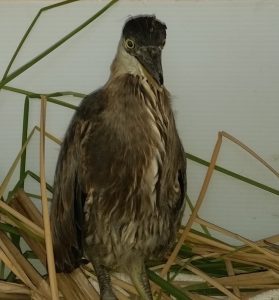 She was rescued by Inyo Water Department employees and brought to Eastern Sierra Wildlife Care on a wing and a prayer.

It takes a Great Blue Heron sixty days to mature and she had more than 40 days to go.

On June 10, director Cindy Kamler noted that the heron had managed to break her leg while practicing perching. (This is not uncommon for these long-boned, clumsy young wading birds, both in the wild and in captivity.)

On June 15, avian orthopedist Dr. Shannon Riggs responded to an email plea from ESWC and offered to see if she could help the young heron. Riggs is animal care director for Pacific Wildlife Care in Morro Bay.

Immediately, another email plea went out for someone to transport the GBH. Bishop native Katie Mulder (a former intern at ESWC who is currently living in Morro Bay) called just a few minutes later. She could drive to Tehachapi if someone from ESWC could bring the heron that far.

ESWC Rescue volunteer Janice Pedersen of Independence responded to the plea and arranged to meet Katie the next day. Katie delivered the Great Blue Heron to Pacific Wildlife Care at 3:00 on the 16th.

The intake report from Dr. Riggs read (in part): “The heron arrived uneventfully. . . We sedated her, took radiographs, and replaced the splint. I think the fracture is a good one for repair and plan to do the procedure tomorrow.”

ESWC staff, volunteers and friends collectively held their breath until Monday, June 20th, when they received a report from Dr. Riggs: ‘The heron is doing pretty well. She had surgery on Saturday, which was fairly uneventful. . . .The bird is eating well and standing . . . I am pretty happy with how the surgery went and how the bird is recovering so far.”

“A lot of people helped give this young wading bird not only a second, but a third chance, to survive and become a free, wild bird,” said Cindy Kamler. “The work of wildlife rehabilitation can be heart-breaking, but seeing so many compassionate folks come together makes it all worthwhile.”

I hope the bird will be returned here for release. I know it would be a big job to organize the transport, but it’s important. So many thanks to *all* the great people who cared enough about the bird to make it possible for her to survive, starting with the… Read more »

What a purdy birdie.