By News Staff on May 9, 2019 in General Misc. Stories, Law Enforcement 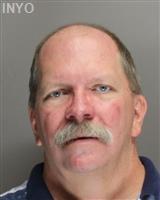 Participants in the program are required to pay certain fees to the Department, and it is alleged that a portion of those fees were diverted to Mr. Vaughn’s personal use or the use of other individuals.  Mr. Vaughn was the supervisor of the Work Release Program from approximately May, 2014 to March, 2018.

At this time, no other employees of the Sheriff’s Department are implicated in the investigation.

The District Attorney reminds the public that a defendant in any criminal case is presumed to be innocent until the contrary is proved beyond a reasonable doubt.

Take away his Pension…

But remember, he’s a cop – he’ll get a disability retirement due to the trauma he suffered from being prosecuted!

Why is his arrest NOT, listed as an arrest on citizen rims inyo county?!??!!

It was . Pretty sure he bailed out , therefore removing him from citizen runs

So, DA Hardy issues a press release featuring the accused man’s mug shot, describing what he did and the nature of the criminal charges filed against him, and then reminds us that the accused is presumed innocent.

This embezzlement apparently took place over a four-year period.

And the Undersheriff who oversees the jail didn’t know about it?

My question is irrelevant

Astute1
Reply to  Alfred the Butler

This was occurring when they busted a CO at the jail for embezzlement. They didn’t catch it then either.