By News Staff on September 10, 2014 in Government Agencies/Utilities 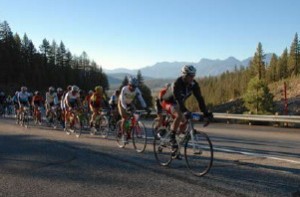 That began a 102 mile bicycle ride through a large and immensely scenic part of Mono County. Over the course of the ride, the cyclists would climb six summits totaling 6400 vertical feet and do this all at elevations between 6400 and 8200 feet.! At 9am the same morning, another 450 cyclists also left The Village in Mammoth Lakes on the shorter 42 Mile Piccolo and 70 Mile Medio routes of the Mammoth Fall Century & Gran Fondo cycling event. The Piccolo riders would climb over 2300 feet and the Medio riders would climb over 3600 feet. 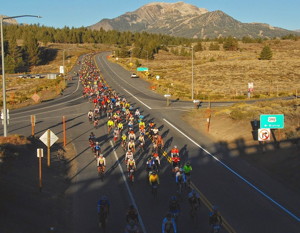 they originally started. Olympian, Deena Kastor, and the Mammoth Track Club were out on Hwy. 203 cheering the returning riders and offering them cold drinks and an inspirational “push” for a few feet if necessary. The cyclists loved it! In total, 1200 people from 22 States participated, and this year’s event was the biggest and best in its 21 year history. Based on extensive feedback from participants, it was a great success. With 1200 participants, we estimate the event could have brought as many as 4000 people into Mammoth for the weekend. Many riders said it was one of the most well-organized Century or Gran Fondo rides they had ever attended and the scenery was stunning…and they said they’d be back next year!!

Local Law Enforcement including Mammoth Lakes Police Department, Mono County Sheriff and the California Highway Patrol were incredibly supportive to the event and helped keep our riders safe on the roads. We received many reports of CHP officers providing great traffic control for the cyclists on Hwy. 120 and Benton Crossing Road and even checking on stopped cyclists to make sure they were okay. Local government agencies that provided important and enthusiastic support included Town of Mammoth Lakes and MLPD, Parks and Recreation, Public Works and Engineering. Mono County agencies that were very helpful included Sheriff, Emergency Medical Services, Special Events, Health Department and Public Works. Finally, Cal-Trans was incredibly important to the success of the event helping with permitting and technical input.

We work to provide daily news to all of the Eastern Sierra, in the tradition of Eastern Sierra News Service and the Sierra Wave. We bring you daily happenings, local politics, crime, government dealings and fun stuff. Please contact us.
View all posts by News Staff →
Letter to the editor: In defense of caution
MCWD says groundwater critical this drought year
5 Comments
Newest
Oldest Most Voted
Inline Feedbacks
View all comments

Show me the money!

I agree – a GREAT event. But yuppie?…..as in “Young Urban Professionals”? I don’t know what you’re definition of “young” is but there were plenty of “well-seasoned” folks out there killing it. Check the results if you need confirmation. And be careful, you wouldn’t want to wear out your arm… Read more »

A GREAT event but when did road biking become such a yuppie sport? I road bike. I love it, but I don’t think I’m nearly as cool as some of those guys think they are. I enjoyed passing them with all their high dollar gear that I know I cannot… Read more »

I think the word you’re looking for Tinner is conformity. It strikes me as so funny that the sport that first came into america’s consciousness as the ‘anti’ sport…non-conformist, anti-traditionalist etc etc. (remember Breaking Away?) has become so stiflingly conformist. wear the kit, use the same accessories, etc etc. Really… Read more »