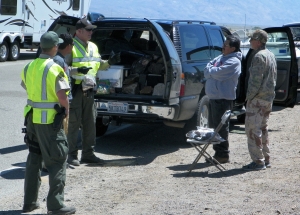 Stop! In the Name of Fish & Wildlife!

A lot of people do not like being stopped at checkpoints regardless of the reason, especially when they have not done anything wrong. But according to California Fish and Wildlife, the courts have determined that, while not a public safety issue, they can use checkpoints to protect the common interests of the public to protect its resources.

With only 4 game wardens and a lieutenant covering 14,000 square miles, checkpoints are an effective way to enforce regulations and educate the public. Bringing in other game wardens from other areas, a checkpoint was established at the truck weigh station just south of Bishop on Highway 395 Monday morning. Game Warden Chad Elliott from Northern Mono County said that they haven’t done a checkpoint in awhile and that they try to respect the public by being as unobtrusive as possible.

“There has been a lot of research on checkpoints and they are an effective way to catch those that break the rules,” says Elliott. He went on 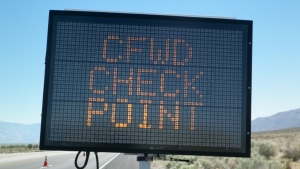 to say that most of the actual inspections without a violation only take two-three minutes and screening usually takes only seconds.

Today it was Elliott’s job to tally and time the actual inspections. The idea is to make the checkpoint as painless as possible for the public by being as efficient as possible. Fortunately for Elliott and the other wardens working the checkpoint, it was a beautiful sunny day with mild temperatures and little wind.

Not everyone was so fortunate. At least eight or more citations were issued by mid-day to some unlucky fishermen for either not having fishing licenses, being in possession of trout over the limit, or the double-whammy of both. The only thing that might have made it an even worse day for these unlucky anglers would be if they also got a speeding ticket on the way home. And as any experienced fisherman knows, that speeding ticket is likely to be a lot less expensive than a Fish and Wildlife fine!

So just how clueless or abusive of fish and wildlife regulations can some fishermen be? Elliott related a story about stopping three fishermen a couple of years ago. They had 119 trout in their possession! It is not clear whether these fishermen just did not know how to read…or count. It could have been both.

One thing is for certain: If charged with a Fish and Wildlife violation, don’t worry so much about not knowing how to read− just expect to be able to count in hundreds.