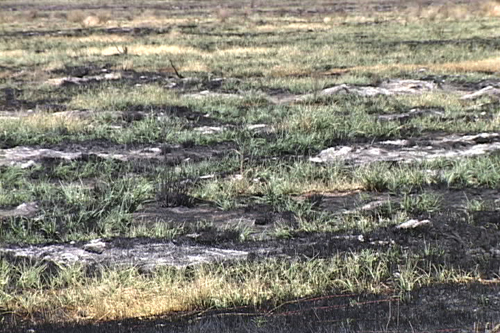 As one local man said, you can literally sit around and watch the grass grow north of Independence, and at the same time get the real picture of the importance of groundwater.

Fire swept down from the Sierra in early July and scorched the Black Rock area north of Independence. In some places, no sign of live plants. In others, a miraculous new emerald cover on top of the black earth.

Photos before the fire show two specific areas. One with live shrubs just south of the 8 Mile ranch. Statistics show that the groundwater sits down about 18 feet – below the root zone of grasses, even though it’s classified as meadow. The fire torched all plant life, and remains dead and barren today. You can see old clumps of what used to be meadow grasses in this area, before the groundwater was dropped by pumping and shrubs moved in.

Across Highway 395 to the east, another area, where the groundwater sits at around 2 to 4 feet down hosted grasses and shrubs before the fire, and after the fire new life showed up within a couple of weeks. The grasses continue to grow there.

When asked about this situation, California Native Plant Society official Daniel Pritchett, said that the water table in the area had been drawn down since 1987. Due to changes in management on the east side of 395, the water table recovered to the grass rooting zone in 1998.

A dramatic example of the impacts of a lowered groundwater table, particularly as dust blows off the west side of the Owens Valley in areas totally exposed by the fire where plant life has not returned.

Scientists add that plants are like the canary in the coal mine – major indicators of the health of an environment. When they go, so can insects, animals and air quality, dependent on them.

We work to provide daily news to all of the Eastern Sierra, in the tradition of Eastern Sierra News Service and the Sierra Wave. We bring you daily happenings, local politics, crime, government dealings and fun stuff. Please contact us.
View all posts by News Staff →
Critical Habitat For Sierra Bighorn Sheep
Three Women Jailed on Stolen Credit Card Charges