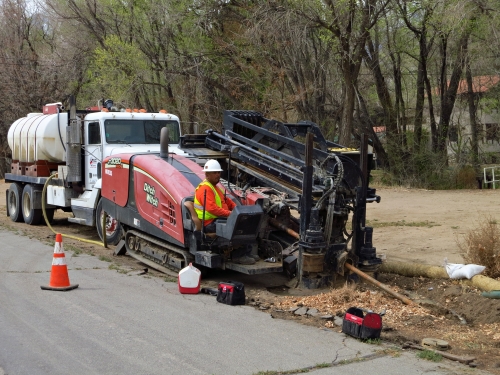 Digital 395 Work to Start in BishopThe contractors installing Digital 395 are expected to start installing conduit on city streets as  early as this Thursday, 4 April. Work is expected to continue for several weeks. The work on City of Bishop streets is under an agreement with California Broadband Cooperative, the group that is constructing and will operate Digital 395.

Although there won’t be trenching, installing conduit by boring does require that pits be excavated every few hundred feet along the streets. In addition to the boring pits, numerous manholes and vaults will also be installed.  As with most construction, there will be numerous inconveniences while work is underway.  Equipment, workers, and excavations in the street will require attention, impact traffic, and impact parking at times. There may be lane and street closures. The city will work with Digital 395 to minimize the impacts and restrictions, but residents, drivers, and pedestrians should be cautious, take alternate routes when available, be alert for hidden hazards, and be patient with  some inconvenience and with delays.

I also gather from Ms. Langou’s post that the government and its employees will get the benefits of Digital 395 immediately, and without charge; while we the people, who funded it, will have to pay market rates for the high-speed service and remain subject to the business decisions of the… Read more »

@ julie langou So, let me get this straight: After $100 million in taxpayer money is spent to bring high-speed internet service to rural areas like Olancha, Olancha (and other outlying areas) still won’t get such service unless a private outfit -schat.net – applies for and gets more taxpayer money… Read more »

Is it true that Olancha will not have access to the hight speed service?