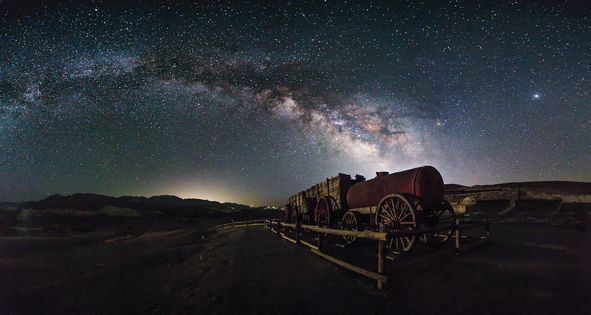 DEATH VALLEY, CA – Mark your calendars! The annual Death Valley Dark Sky Festival will take place February 10-12. Explore the wonders of space from one of the darkest locations in the United States. Join scientists and park rangers to learn about the cosmos and how Death Valley National Park has been used as an analog for the exploration of distant worlds.

Most people in North America cannot see the Milky Way from their homes due to light pollution. Death Valley National Park is a great place to see the stars. It is recognized as an International Dark Sky Park.

All Death Valley Dark Sky Festival programs are free and open to the public. Some of the programs are specifically targeted for families with children. For a full list of programs and lodging options visit the park’s website at nps.gov/deva.

Bring a red flashlight. Optional items are binoculars and a chair. Saturday, February 11  5:30 am – 6:30 am Moon Walk

Short walk into sand dunes. Compare and contrast dunes on Earth with other planets. 7:00 pm – 8:00 pm The Cosmic Autobiography by Katarina Markovic

Cosmology is the study of the full history of our universe from the first moment of the Big Bang, to its inevitable death in the distant future. Listen to the story about how we understand the universe came to be as it is, including its particles, forces, stars, galaxies, as well as the ever-mysterious dark matter and dark energy. 7:00 pm – 10:00 pm Star Party

Death Valley National Park is the homeland of the Timbisha Shoshone and preserves natural and cultural resources, exceptional wilderness, scenery, and learning experiences within the nation’s largest conserved desert landscape and some of the most extreme climate and topographic conditions on the planet. About two-thirds of the park was originally designated as Death Valley National Monument in 1933. Today the park is enjoyed by about 1,300,000 people per year. The park is 3,400,000 acres – nearly as large as the state of Connecticut. Learn more at www.nps.gov/deva.

M.C. joined Sierra Wave Media in 2018 as the Traffic and Billing Manager and in January of 2021 was made General Manager of the station. After 35+ years, M..C. retired in 2006 as a Vice President of Union Bank and last served as V/P Manager of the local Bishop Office. She has been in the Eastern Sierra since 1985 and with her husband, Ron, makes her home in Big Pine. M.C. enjoys keeping busy and manages to do so with her family which consists of her daughter, two grandsons and four great grandchildren all of who live in Bishop. Currently she is a member of the Rotary Club of Bishop Sunrise and serves as a trustee on the Slager Sunset Foundation.
View all posts by MC Hubbard →
Mono County COVID-19 TEST-TO-TREAT & VACCINATION CLINIC SCHEDULE: February 2023 Mono County
Today January 24 is the Deadline to Sign Up for Free Wildfire Workshop

Nice! Sounds like fun. Too bad Inyo County took at least 12 years to create and pass a lighting ordinance, and now they refuse to do any enforcement