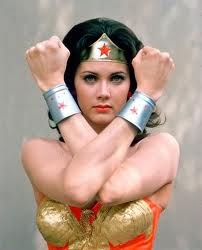 We just can’t resist more Hollywood news to start things off. Get this – Wonder Woman has transformed herself into a jazz singer who will appear at the Catalina Jazz Club this week. Wow. I guess that’s why they call her Wonder Woman. Lynda Carter, you may recall, wore the bullet reflecting bracelets, tall red boots, and form-fitting red white and blue suit and a tiara that clearly helped her to perform wonders.

In her Los Angeles Times ad, the aging star looks youthful in her black dress. She will release a new CD called “Crazy Little Things”. Catch her act, if you dare, at the Catalina Jazz Club Thursday through Saturday. Some Hollywood types have the power to transform themselves. There’s still hope for Charlie Sheen.

Loved the John Stewart Show in which he pointed out how many times NBC news reporters have to say the network is partly owned by General Electric, a mega corporation with its hands in everything from appliances to weapons, wind turbines, a network, finance and aviation. GE had a hand in the Japanese Nuclear plants.

The most outrageous story, likely not reported by NBC news, was that General Electric made $14.2 Billion in profits and paid no taxes. In fact, according to the New York Times, the corporation will get a $3.2 billion tax refund. The news report says GE employs a department of lawyers to find all the tax loopholes. Even though President Obama says he wants to close those loopholes, he recently gave a thumbs up to GE CEO when he appointed him to his economic advisory board. As one of our website comments wrote – cronyism is government’s way of life.

Why did Caltrans have to bring over a tree cutting crews from Stockton to whack off tree limbs on the side of Highway 395? Seems the agency has a tree cutting division that goes to school to learn how to trim trees. Doesn’t that seem somewhat expensive when every community has competent tree trimmers?

We often wonder about the competency of Sacramento legislators as we read daily reports from Capitol Television News Service. They do truly act like 5-year-olds mostly. If one party 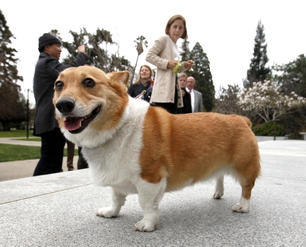 does something, the other will call it a disaster, no matter what. Kind of like the song “You say tomato. I say tomaaaaaato. Let’s call the whole thing off.” They can’t call the whole thing off in Sacramento, but they could end the bickering. We have hope. A Republican Senator actually complimented Governor Brown’s dog, Sutter, who attends hearings with the Gov. Senator Bob Dutton is quoted in the LA Times as saying, “These are not real pleasant times for anybody. Sutter kind of makes you feel like it will be all right.” Hey. If you need a dog to give you hope and treat each other like colleagues, go for it!!

Columnist and author Thomas Friedman recently pointed to the tribal nature of life in the middle east and the near folly of America trying to choreograph what goes on there. Friedman admits its complicated but as for our participation in wars there, he says, “Sadly, we can’t afford it. We have got to get to work on our own Country. If the president is ready to take some big, hard, urgent decisions, shouldn’t they first be about nation-building in America, not in Libya? Shouldn’t he first be forging a real energy policy that weakens all the Qaddafis and a budget policy that secures the American dream for another generation? Once those are in place, I will follow the president,” writes Friedman, “‘from the halls of Montezuma to the shores of Tripoli.'”

We work to provide daily news to all of the Eastern Sierra, in the tradition of Eastern Sierra News Service and the Sierra Wave. We bring you daily happenings, local politics, crime, government dealings and fun stuff. Please contact us.
View all posts by News Staff →
Interim Town Manager explains expert help for the town
Overkill in Bodie