By News Staff on March 26, 2013 in Government Agencies/Utilities 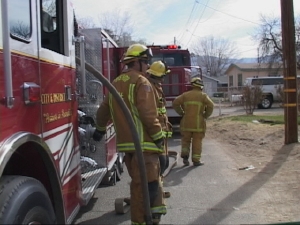 Bishop volunteer firefighters rushed to the scene of a reported structure fire in the Dixon Lane area Tuesday morning around 10am.

On scene, Fire Chief Ray Seguine said it appeared the fire, which started in the garage of a home on West St., was out.  But the Chief wanted to make sure because some smoke from the upper part of the garage caused concern.  It was not immediately known how the fire started.  A resident of the home was working with firefighters and may also have taken steps to put the fire out.