The 5.5-acre parcel at the corner of U.S. Hwy. 395 and Bartell in Big Pine has fluctuated between fire hazard and dust bowl since the water pipe under the highway from Big Pine Creek water sources to the parcel was removed nearly 10 years ago. But, the controversial history of the plot should have a useful final chapter once a recycled water project is completed by spring of 2016. 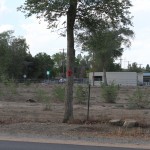 The project, the Bartell Parcel Recycled Water Regreening Demonstration Project, proposed by Inyo County Water Department Mitigation Manager Larry Freilich, was approved for funding, along with six other projects, by the Inyo-Mono Integrated Regional Water Management Program last Wednesday. The $336,050 grant funding for what will be the first recycled water project in the county was part of the third and final round of Proposition 84 monies, funneled from the California Department of Water Resources.

In its conceptual stage, the project will recycle wastewater from the Big Pine Community Service District’s treatment ponds, pumped to the site 1.6 miles west of the ponds and irrigate crops appropriate for Title 22 reclaimed water.

According to Denis Tillemans, who monitors the BPCSD’s wastewater treatment facilities, the ponds process approximately 90,000 gallons a day, which translates to 4 acre-feet a month. To put that in perspective, ranchers who flood irrigate pastureland are allocated 5 acre-feet through the irrigation season.

The wastewater receives what Tillemans described as “partial secondary treatment.” Lahotan Regional Water Quality Control Board will have the final word on crop selection, Tillemans said.

The demonstration project, adjacent to Big Pine schools, will have a host of partners. Big Pine School District Superintendent Pamela Jones will participate in project development, according to the proposal. “The project could be designed as an educational resource that feeds into the District’s Expeditionary Learning curriculum.” With modifications to the infrastructure, the Big Pine Paiute Tribe of Owens Valley wastewater ponds could be used for irrigation purposes on tribal lands. The proposal states that the parcel owner, Los Angeles Department of Water and Power, has expressed strong support.

The task list is long, starting with community consultation and the development of a conceptual site plan, scheduled for completion this fall.

According to Mark Drew, program director for the IRWMP, the program’s piece of the pie totals $1.76 million, enough to cover the cost of the top seven projects, of which the Big Pine project was the seventh and final proposal funded. Technically, funds will fall $66,000 short of fully funding all seven, but Drew was confident all seven would move forward to completion.