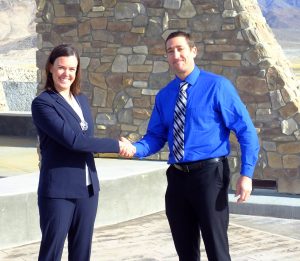 The District is a joint agency of Alpine, Mono and Inyo Counties responsible for all federal and state air quality standards to protect the health and welfare of its residents and the environment.
Ms. Piersall has been employed by the District since 2015 as an Air Monitoring Technician. Originally from northwestern Montana, Ms. Piersall brings to the position a diverse background. She graduated from the University of Montana with a B.A. in Ecology before conducting research on glaciology, snow science, and water resources in Central Asia as a Fulbright Scholar.
Prior to working at the District, Ms. Piersall was employed by the U.S. Forest Service in addition to working as a field researcher, ski patroller, and wilderness ranger.
“I look forward to continuing the work of the District to improve air quality and protect the residents of Alpine, Mono and Inyo counties. The District has a talented and experienced staff that I am honored to work closely with,” says Ms. Piersall.
“The District welcomes Ms. Piersall to her new position as Deputy APCO and looks forward to her continued commitment and future contributions to District staff and community,” says Phill Kiddoo, Air Pollution Control Officer.
Ms. Piersall’s appointment to Deputy APCO was effective January 2, 2017.
She succeeds Mr. Duane Ono, who retired at the end of 2016, after more than 25 years of service with the District.

Welcome, Ann. Will you please research and present information about the long term health effects of the cloud seeding program in California (and Nevada) that has been ongoing since the 1970’s. Or at least, find out exactly which element, elements, or chemicals are being used. Is it silver iodide, aluminum,… Read more »