BISHOP, CA. August 12, 2019 – On August 9, at approximately 7:15am, Inyo County Sheriff’s Deputies, and a MINT Investigator arrived at a residence on Winuba Lane to serve an arrest warrant on Allen “Ziggy” Stone, a 29-year old Bishop man. 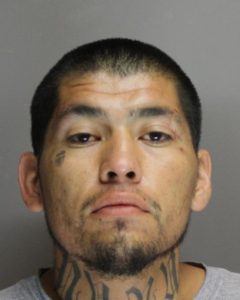 Deputies attempted to contact Stone in a travel trailer he had been confirmed to be staying in.  Stone failed to answer the door and barricaded himself inside.  The Special Enforcement Detail was activated to respond, and additional units from CHP and the Bishop Police Department arrived to assist.

Stone exited the travel trailer wearing body armor and holding an improvised explosive device.  Stone attempted to detonate the device in his hand while surrounded by family and law enforcement.  After a short struggle, Stone was disarmed and taken into custody.  No injuries resulted from the incident.

Drugs were absolutely involved in his decision making, no question. But the additional charges, attempted murder etc. are ridiculous. As always LE and their approach always escalate the situation. It went from probation violation for not checking in to attempted murder. It seems obvious that he was afraid of LE… Read more »

We should pass a few new laws outlawing felons from possessing body armor, ied’s, battery, resisting arrest, violating probation, and guns and ammo. More laws will make us much safer!

Charles O, and Dennison…yes the cops lie. I’m not saying that the guy is innocent but he has not been found guilty.

With this one,if Law Enforcement is “lying”,it sure seems an elaborate scheme they came up with and story to make an arrest….failing to open the door on an arrest warrant, him finally coming out wearing body armor…..with a destructive devise in his hand,holding his family kinda like a hostage and… Read more »

The press release said nothing about drugs being found.

Almost Native, his arrest warrant was for not checking in to probation.

First of all Bencoma never pulled a gun on anyone. They did not have bodycams turned on and his finger prints were not on gun or cartridges. There were not 1 not 2 but 3 mistrials before he was convicted and his case is currently in the appeal process. Not… Read more »

So let’s see….with Bencoma,LE lied about the pistol…and the three “mistrials” mean he was actually not guilty…even though a jury found him guilty….and with this one,the threats with the IED (destructive devise),they’re made up too,where only the parole violation and drug charges will stick.meaning he’ll be out of jail and… Read more »

@Desertrat,
If we can’t believe the cops, why should we believe you?

The Deputy, (not named by Desert rat, so I won’t name him here) was not found guilty of misconduct, still lives in the area, and still works for the Sheriff’s Dept, I can’t address the other stuff, except the Sheriff’s office said they did not have cameras on because they… Read more »

I’m not trying to defend this guy, but I wish the article said what the arrest warrants were for?

What a waste of a life. Can’t wait for the family he didn’t care if he blew up come running to defend him. That’s the most entertaining part.

Maybe this time , the Judge can put him away until his hair turns gray . This dude shouldn’t have been walking free in the first place , seeing how only 2 years ago , he committed an armed robbery on the 29th of August, right after committing an assault… Read more »

Try talking to the judge brian lamb.. you know the one who was admonished 3 times.. there’s a reason these P.O.S. keeps getting released. AND Its BRIAN LAMB.

Tinner…I think they are….especially for a felon and career criminal…what I’m expecting soon is people commenting,defending this guy,saying how he,this “child”,is being picked on by Law Enforcement,kinda like they did with Ray Bencoma when he pulled the gun on LE a few years back ,ended up getting shot,and soon followed… Read more »

IED’s should be banned.