Just a year-and-a-half ago, attorney Greg James updated the Inyo Board of Supervisors on the possible resurrection of the Yucca Mountain Nuclear Waste Repository in Nye County Nevada, 17 miles from the Inyo County line.

Nevada Senator Harry Reid, one of the loudest opponents of the project, had announced his retirement. While Presidential candidate Hillary Clinton had indicated the project would stay on the shelf where it was carefully placed by then-President Obama, James said without Reid, Congress could pass veto-proof funding for Yucca by including the funding in an overall funding bill.

Congress didn’t have to. The first President Trump budget includes $120 million to restart the licensing process.

The good news, however, is that nobody particularly likes the proposed budget, so all is not lost. The bad news, not being liked doesn’t appear to be a deterrent for Congress. With the exception 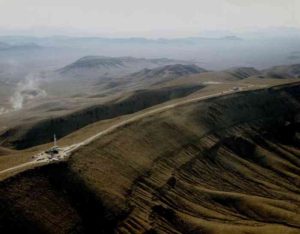 of job-hungry Nye County, Nevada hates the project that would accept nuclear waste transported from all over the country for the next 100 years and entomb it. Inyo County hates it because that tomb is in the Amargosa River watershed that runs through or under Death Valley, Tecopa and Shoshone. Politicians who love the project, according to an article in Forbes, generally come from states with a lot of nuclear waste waiting for a permanent home.

Nevada got the project through a 1987 amendment to the Nuclear Waste Policy Act. Washington and Texas were among the final three potential locations. But, at the time, according to an article in The Atlantic, the Speaker of the House represented Texas and Washington’s senator was the majority leader. The amendment is now referred to as the “Screw Nevada Amendment.”

Considering the number of legal and technical contentions filed by Nevada, 218 and growing, just completing those hearings could take five years and $2 billion, according to The Atlantic article.

A 2008 estimate by the Department of Energy put the total cost of research, construction and operation at $96 billion which includes the $13.5 billion already spent.