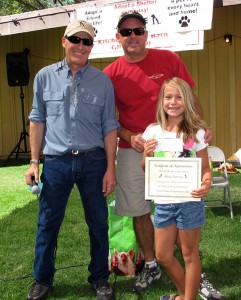 Budding animal activist, Alicia Ramirez of Azusa, California, was about to turn 10 years old and wanted to do something that most kids her age wouldn’t dream of doing. She decided that this birthday she would ask her family and friends to not give her any birthday gifts. Instead, she asked that they make donations to help Shelter pets in need.

Her favorite channel is the Animal Planet and one of her favorite programs is “Animal Cops Houston.” She thought she would raise money to send to the Houston SPCA featured on the show, but her mom, Karine, suggested that donations to a local animal shelter (with no television exposure) might be more needed. Karine, her husband, Rich, and Alicia, are frequent visitors to the Eastern Sierra and were aware of the Inyo County Animal Shelter and the animal welfare non-profit, ICARE (Inyo County Animal Resources and Education), through the Pets of the Week in the Inyo Register, as well as the ICARE web site (www.ICAREforPets.org).
Alicia decided to make her birthday donation to the ICARE Stitch Fund, which helps ill or injured Inyo County Shelter animals receive the lifesaving veterinary care they need to find loving, adoptive homes.
The Ramirez family were visiting Bishop over the Labor Day weekend and Ted and Lisa Schade of ICARE invited them to attend the ICARE Pet Show at the Tri-County Fair on Sunday, September 2nd. That’s where Alicia presented her birthday donation in the amount of $400 to ICARE President, Ted Schade. And, Alicia was presented with a Certificate of Appreciation, along with an ICARE cap and t-shirt to thank Alicia for her unselfish act of kindness. Many, many special needs Shelter cats and dogs will benefit from Alicia’s amazing birthday gift. Way to go, Alicia!

We work to provide daily news to all of the Eastern Sierra, in the tradition of Eastern Sierra News Service and the Sierra Wave. We bring you daily happenings, local politics, crime, government dealings and fun stuff. Please contact us.
View all posts by News Staff →
Wind-fallen tree removal starts in Reds Meadow
Animals and humans: the ICARE winners
5 Comments
Newest
Oldest Most Voted
Inline Feedbacks
View all comments

I just wish them the best in these times .. but i know they will shine.

the change it had to come

Good comment Al.
I maintain that the sooner the older, jaded, and unhappy of us die off – the next generation (that tends to be more intelligent and more liberal than the one before it) will do things differently and hopefully more improved.

Gives me hope in the up coming generation. There are shining examples like her.

Alicia gives me hope for the future of animal welfare! Thanks for being so thoughtful, Alicia!

Alicia gives me more hope than most politicians.