The Big Meadow Fire continues to burn toward the Tioga Pass road, which remains closed past White Wolf. Now Park Officials say that 120 between Crane Flat and White Wolf will remain closed through Labor Day Weekend and perhaps longer.

At last word the Big Meadow Fire in Yosemite National Park continued to cause trouble for those whose homes are threatened near Foresta along with visitors traveling to the Park. 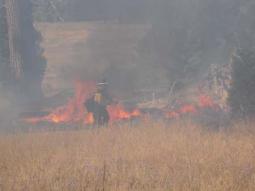 The smoke was thick enough that Highway 120 over Tioga Pass closed for periods of time during the day Monday and into Tuesday and remains closed at last word. When the road has been open, park staff have escorted travelers with a pilot car through areas above Crane Flat. The Big Oak Flat Road, the connection between Highway 120 over Tioga and Yosemite Valley, remained completely closed at last word.

Tuolumne Meadows remains accesible from Lee Vining. You can check the Tioga Pass webcam for conditions at this site.

The Big Meadow fire started on Wednesday August 26, after a prescribed fire jumped the planned holding lines. The fire is burning through brush, dead logs and standing snags, left over from the big fires near Foresta in 1990. Park Officials list this fire at 55% contained and 5900 acres in size.

Park staff has received many questions regarding the wisdom of conducting a controlled burn in August. Park officials say that prescribed fires can be ignited at any month of the year as long as conditions match a predetermined criteria, regarding temperature, humidity, fuel type, wind, smoke dispersal, and others. The conditions had lined up properly when the fire was ignited.

The official explanation is that no matter how careful fire fighters are, there is always risk when lighting a prescribed fire. According to the official park response, The development of the prescription window and its review and sign-off are processes that agencies have carefully developed to minimize the risk of a fire escape. However, when dealing with all the complexities that can affect a fire, it is nearly impossible to reduce risk to zero.

What went wrong and whether anyone will be held accountable are questions that will wait until the fire is out. Park officials say that staff will conduct a careful review once the fire is extinguished.

We work to provide daily news to all of the Eastern Sierra, in the tradition of Eastern Sierra News Service and the Sierra Wave. We bring you daily happenings, local politics, crime, government dealings and fun stuff. Please contact us.
View all posts by News Staff →
Three Alleged Poachers Caught By Local Warden
H1N1 Vaccine Safety Concerns Answered