A sudden and heavy weather system delivered serious atmospheric change to the Eastern Sierra this week. Even so, news that the Park Service had closed Tioga Pass surprised many. So did the fact that snow had practically nothing to do with the closure. 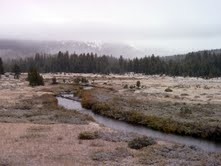 Yosemite spokespeople did inform Caltrans that both Tioga and Sonora were closed as of Monday due to snow. In fact, in Yosemite, photographer Lloyd Chambers emailed our weather forecaster Dennis Mattinson that park service rangers told him they closed Tioga due to snow. Mr. Chambers wrote that he had observed conditions firsthand at the summit from 3am to 8am when the temperature was rising. He said the bit of snow that had fallen had been “slushed away by traffic, leaving the roadway all but clear.” Chambers said later an 18-wheel big rig was allowed through, making the closure seem flimsy.

Sierra Wave spoke to Park Ranger Kari Cobb who said that Tioga Pass was closed, because of rain and rock and mud slides with a large amount of debris on the road. Cobb said, “It didn’t have much at all to do with snow and ice.” She said there were several larger rocks on the road and that cliffs were “dropping rocks continuously. We wanted to avoid vehicle damage and show safety concern for our visitors.” Cobb assured us Tioga Pass was not closed for the season. She admitted the other rangers may not have known the real cause for closure.

Mr. Chambers emailed back that he saw very few rocks and no debris from Tuolumne Meadows to Crane Flat. He was one unhappy visitor.

Others privately noted that communication out of Yosemite has been less than consistent. At last report, the status of Tioga Pass depended on more weather moving through.

We work to provide daily news to all of the Eastern Sierra, in the tradition of Eastern Sierra News Service and the Sierra Wave. We bring you daily happenings, local politics, crime, government dealings and fun stuff. Please contact us.
View all posts by News Staff →
Inyo County Looks at Watson Property in Big Pine
Mammoth Police Arrest Victorville Man on Attempted Murder Allegation