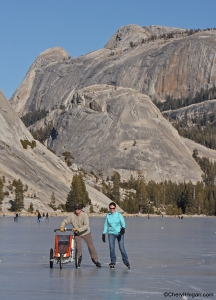 A local family from Mammoth Lakes, Ca enjoys a warm, sunny day today (Saturday 1/14) at 10,000 feet in January! This was shot at Tenaya Lake in Yosemite. Photo courtesy of Cheryl Hogan Photography in Mammoth Lakes.

Proposed peak season entrance fees and revised fees for road-based commercial tours would generate badly needed revenue for improvements to the aging infrastructure of national parks. This includes roads, bridges, campgrounds, waterlines, bathrooms, and other visitor services.
“The infrastructure of our national parks is aging and in need of renovation and restoration,” said U.S. Secretary of the Interior Ryan Zinke. “Targeted fee increases at some of our most-visited parks will help ensure that they are protected and preserved in perpetuity and that visitors enjoy a world-class experience that mirrors the amazing destinations they are visiting. We need to have the vision to look at the future of our parks and take action in order to ensure that our grandkids’ grandkids will have the same if not better experience than we have today. Shoring up our parks’ aging infrastructure will do that.”
Under the proposal, peak-season entrance fees would be established at 17 national parks. The peak season for each park would be defined as its busiest contiguous five-month period of visitation.
The proposed new fee structure would be implemented at Arches, Bryce Canyon, Canyonlands, Denali, Glacier, Grand Canyon, Grand Teton, Olympic, Sequoia & Kings Canyon, Yellowstone, Yosemite, and Zion National Parks with peak season starting on May 1, 2018; in Acadia, Mount Rainier, Rocky Mountain, and Shenandoah National Parks with peak season starting on June 1, 2018; and in Joshua Tree National Park as soon as practicable in 2018.
A public comment period on the peak-season entrance fee proposal will be open from October 24, 2017 to November 23, 2017, on the NPS Planning, Environment and Public Comment (PEPC) website https://parkplanning.nps.gov/proposedpeakseasonfeerates. Written comments can be sent to 1849 C Street, NW, Mail Stop: 2346 Washington, DC 20240.
If implemented, estimates suggest that the peak-season price structure could increase national park revenue by $70 million per year. That is a 34 percent increase over the $200 million collected in Fiscal Year 2016. Under the Federal Lands Recreation Enhancement Act, 80% of an entrance fee remains in the park where it is collected. The other 20% is spent on projects in other national parks.
During the peak season at each park, the entrance fee would be $70 per private, non-commercial vehicle, $50 per motorcycle, and $30 per person on bike or foot. A park-specific annual pass for any of the 17 parks would be available for $75.
The cost of the annual America the Beautiful- The National Parks and Federal Recreational Lands Pass, which provides entrance to all federal lands, including parks for a one-year period, would remain $80. Entrance fees are not charged to visitors under 16 years of age or holders of Senior, Military, Access, Volunteer, or Every Kid in a Park (EKIP) passes. The majority of national parks will remain free to enter; only 118 of 417 park sites charge an entrance fee, and the current proposal only raises fees at 17 fee-charging parks.
The National Park Service is also proposing entry and permit fee adjustments for commercial tour operators. The proposal would increase entry fees for commercial operators and standardize commercial use authorization (CUA) requirements for road-based commercial tours, including application and management fees. All CUA fees stay within the collecting park and would fund rehabilitation projects for buildings, facilities, parking lots, roads, and wayside exhibits that would enhance the visitor experience. The fees will also cover the administrative costs of receiving, reviewing, and processing CUA applications and required reports.
In addition, the proposal would include a peak-season commercial entry fee structure for the 17 national parks referenced above. All proposed fee adjustments for commercial operators would go into effect following an 18-month implementation window.
Information and a forum for public comments regarding commercial permit requirements and fees is available October 24, 2017 to November 23, 2017 on the NPS Planning, Environment and Public Comment (PEPC) website at http://parkplanning.nps.gov/commercialtourrequirements. Written comments can be sent to National Park Service, Recreation Fee Program, 1849 C Street, NW, Mail Stop: 2346 Washington, DC 20240.
Contact: NPS Office of Communications, 202-208-6843
www.nps.gov

I hate to say it but I think this is a much needed fee increase, I don’t like it any more than anyone else. However if the feds operate and spend like the feds always have I see a lot of waste with this statement “The fees will also cover… Read more »

No Bad Days….I’m thinking the same way there as you…last time I went to Yosemite Valley,I needed a vacation from my vacation afterwards going up there…TONS of people,many screaming out-of-control children and unleashed dogs harassing my dog…so many people ,noise,traffic-jams and things takes away from the beauty of the area,up… Read more »

$50-100 dollars would be good.
Maybe they can cut the amount of tourists packing the roads.

It’s obvious you have no idea how much of the eastern Sierra economy depends on tourism.