On Saturday, August 17th, 2019, at approximately 5:55 PM, for an unknown reason, the driver of a black Jeep Patriot (SUV) was driving wrong way along US-395, traveling southbound in the northbound #1 lane just north of North Fort Road. 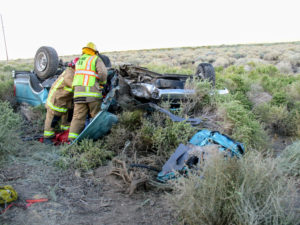 At the same time, a green Ford F-150 pickup was traveling northbound in the #1 lane of US-395. The SUV collided head-on with the Ford pickup, causing the pickup to overturn into the dirt shoulder.

The driver of the SUV was transported to Southern Inyo Hospital by Independence Fire Ambulance, where she succumbed to her injuries. 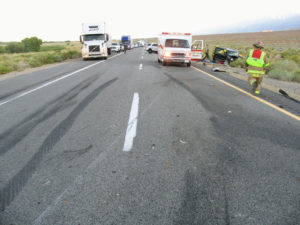 The driver of the pickup was to Southern Inyo Hospital by Independence Fire Ambulance, where he later was flown to Antelope Valley Hospital to be treated for major injuries. The identity of the fatal victim is to be released through the Inyo County Coroner’s Office.

This traffic collision is still under investigation by the California Highway Patrol, Bishop Area Office.”