After Wednesday’s two-and-a-half hour business workshop hosted by the City of Bishop and attended by an estimated 80 residents, one thing is sure: there are plenty of ideas on how local businesses can flourish in northern Inyo County. 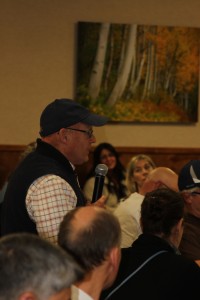 Alex Yerkes of Alex’ Printing was the first to identify a challenge to local businesses: getting people to stop in downtown.

City Administrator Jim Tatum started the session with a simple question: What are the biggest concerns in Bishop’s business community? There was dead silence for about a second before Alex Yerkes started the conversation with “getting people to stop in town.”

That set off an avalanche of concerns that turned into solutions or ran into brick walls wrapped in red tape.

Some of the dialogue strayed into areas covered by the Economic Development workgroups despite Tatum’s efforts to keep a laser focus on what the City of Bishop could do specifically. 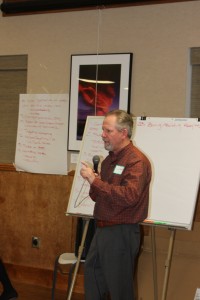 Bishop City Administrator and workshop leader Jim Tatum in front of the long list of concerns and issues facing the local business community.

The conversation reached critical mass around 8:30 p.m. With the flip chart running out of space for any more ideas, Tatum suggested the information be condensed and another workshop scheduled.

Much of the discussion focused on tourism with the recognition that business success dependent on 18,000 county residents was a tough sell. Yerkes suggested themed directional signs to encourage U.S. Hwy. 395 travelers to stop. “For instance,” he asked, “does anybody know if there’s a sign on Main Street for the Dog Park?”

Resurrecting the Tri-County Fairgrounds banner across Main Street, use Fairground activities to get people to come to town, promoting a tour of downtown murals to turn drivers into pedestrians were just a few of the suggestions. 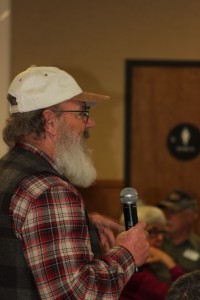 “We need to think of Bishop as a destination,” said Howard Schwartz, owner of Sage to Summit, not just getting passers-through to stop. Schwartz noted the significant and growing rock climbing demographic that flock to the Buttermilks and the Owens Gorge.

Right after getting people to stop in town was where are they going to park their cars. Tatum reported that the City just completed the first phase of its parking study. “The goals are consistency and the distance to Main Street determines the length of parking time. There’s almost some kind of anomaly on every block.”

Bishop has been in discussion with Los Angeles Department of Water and Power for a while to secure the lease on the empty lot next to Holy Smoke Barbecue. Tatum has said parking may not be the best use of the prime retail location, but could be an interim solution.

Another possibility is on-going conversations to open up the parking at the former K-Mart location, in part to meet the need for RV parking.

The empty K-Mart structure was also a focus of concern. There was no lack of what to do with the building – an adventure center, big motel and nice restaurant complex, kids’ activity center complete with roller rink. According to Tatum, the building is leased by Vons.

Another bureaucratic block wall was bought up by Mike Allen of Allen Outdoor. LADWP has revised their leases, now bidding out the property every five years, a big disincentive to any kind of business investment.

In addition, Allen explained that the lease could not be changed during the term. “If we had started our U-Haul rentals under the new leases,” he said, “we wouldn’t have been able to.”

Tatum said he was aware of the issue and the problem was worth its own meeting.

A very literal road block to signage and street banners is the fact most of those would be within the CalTrans right-of-way and under what were described as stringent regulations.

Despite what seemed like insurmountable obstacles, the ideas and reports of on-going efforts kept coming: The Paiute Palace is doing surveys to see who’s here and why, where are they going and where did they come from; social media participation, cell phone apps, City façade improvement loans in the $15-20,000 range, zoning ordinances that encourage business start-ups.

Perhaps the best indicator of improvement for the business community was the fact attendees at Wednesday’s meeting actually signed up for more workshops.

It’s great that the City of Bishop is working to help local business and reaching out for ideas from the community. I’m reminded of the “gap analysis study” done about 5 years ago when locals were told that 75% of retail purchases were made after 5 pm. I’m curious if… Read more »

I have a correction for Trouble’s post. The Vons in Bishop is NOT the highest priced Vons in the state of California. Our Vons in Mammoth is even more expensive. Not that I WANT to win this challenge, but we do win this time.

I would hope customer service would be on the list. I’ve been shopping in Bishop for 30 years, and this is one area that needs improvement. There are some businesses I will never go back to. Also the Inyo County Government web site is about useless, and that says something… Read more »

The last time somebody brought this up, it was said that Kmart owns the land and THAT’S why it sits empty…no competition.

Something has to be done with that public eye sore, the former KMart/Vons building and parking lot. Using the lot for public parking, even if it was a pay one, is a great idea. But not just for RVs. Commercial truckers need a place to park as well, instead of… Read more »

the old kmart building is owned by the Vons/Safeway Corp. a listing on LoopNet states the building will not be sold to a, equal competitor. The grounds are maintained and don’t violate any municipal laws. Only money can save it.

Trouble, I’ll tell you what you don’t know…… How to spell. But I do agree the cost to live here is ridiculous.

Thanks for pointing that out , Spell Check!

Gee, I wonder why people don’t want to stop in Bishop to shop. Maybe because evrybodody knows we have the highest priced grocery store in the state. Maybe because they are rumored to pay other peoples renr to keep compation out. But what do I know.