By News Staff on April 10, 2013 in Government Agencies/Utilities 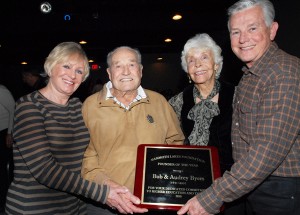 When the Mammoth Town Council last met, officials talked about honoring Dave McCoy and the McCoy family by renaming Minaret Road to McCoy Boulevard. That issue is expected to return at future Council meetings.

Councilman Michael Raimondo asked the street name change for Minaret Road or another street in Town. Raimondo said, “Several people have brought this idea to me. Now is the time. Without Dave and his family, we wouldn’t be sitting here.”

Some also suggested making Dave and Roma McCoy the grand marshals for the July Fourth Parade. John Eastman said, “That man has earned the right.” Jo Bacon said, “I agree with the sentiment but if it will cost $14,000 to $18,000, and it needs to be a budget item.”

Mayor Matthew Lehman said he shared Raimondo’s ideas. He said, “I would like to see this happen sooner than later. I’m interested in moving forward.” Raimondo asked if Measure U money could be used since it speaks to signage and way finding.

Teri Stehlik pointed out that August 24th is Dave McCoy’s birthday – possibly a good time to honor him. Evan Russell told the Council that McCoy has been his boss for 45 years. He said, “We meet once a week. He will be 98 this summer. This would be a great honor. Not so many of the younger people know about him.”

Mayor Lehman said perhaps community members would contribute to a fund to make the street name change. Raimondo supported going out to the community for support. Town Manager Marianna Marysheva-Martinez said it is a “worthy cause.” She suggested that the Council bring back the issue with fund raising questions determined no later than May 1st. All Council members supported that alternative.

change the name of the town to mccoyland,and have someone run around town in a fuzzy dave mccoy outfit

Are you referring to Woolly? No need for cheap shots about the ski area founder.
Benett Kessler

I would gladly help with this fund raising effort and donate what I can to help.

oh hell ya! with out dave and family mammoth wouldent exist. I remember mammoth back in the early 70s what a GREAT and differant place. I was lucky enough to grow up visiting and living in mammoth. Its sad that the younger kids dont realize or care who built it.