Bishop-area Resident Erin Comeau Convicted by Inyo County Jury on Charges of Possession of Methamphetamine for Sale and Child Endangerment. 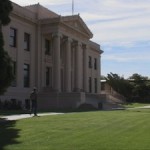 Following a three-day jury trial held in the Superior Court of California, County of Inyo, Bishop area resident Erin Comeau was convicted of two separate felony counts of possessing methamphetamine for sale, and, in one of those cases, misdemeanor child endangerment.

The cases arose from two separate investigations; one by the City of Bishop Police Department in February, 2013, and a second by the Inyo Narcotics Enforcement Team in February, 2014. In the 2014 incident, Ms. Comeau was also convicted of misdemeanor child endangerment. In the second case, Ms. Comeau was accused of storing methamphetamine in an ice cream container in the freezer of her home, easily accessible to her children.

The jury also found Ms. Comeau committed both of these offenses while released on bail on other charges, and found her guilty of one count of possessing controlled substance paraphernalia. Sentencing has been set for April 15, 2015.

The case was prosecuted by Assistant District Attorney Dee Shepherd with the ongoing assistance of the Bishop Police Department and the Inyo Narcotics Enforcement Team.

ok charles o jones… you got me on that one. and i will also admit that meth is more dangerous then ephedrine. on the other hand, i maintain my belief that there are several individuals who frown upon illegal drug use, who at the same time, are guilty of possessing… Read more »

ovlove……Good idea there….If I ever happen to come home and find a drug addict in my home burglarizing the place,instead of calling the Sheriff…or worse…I’ll offer him a job and not even bother calling Law Enforcement.And when he’s done working for me,I’ll direct him to you to help with whatever… Read more »

the goverment knows exactly what they are doing. they have got us where they want us. what blows me away are all the idiots who buy into this bull. its not the drugs its the people. guns dont kill people, people do. people die in auto accidents every day we… Read more »

Having a fair amount of experience dealing with “the government”, I can say they most certainly do not know “exactly what they are doing”. This is why I giggle when I read or listen to the various government conspiracy theories that exist out there. Most of these urban legends give… Read more »

Ovlove all of your responses on this subject are SPOT ON. like I said in my previous post. If the govt tells people something is bad most people swallow it hook line & sinker. I asked everyone to look up the stats about death rates of drugs. Isn’t that what… Read more »

ovlove;…I suggest you read your above post before you say anyone is “putting words in your mouth”…..example is right there about in the middle of your comment,stating “If they are toddlers then the freezer is a wise place for a responsible parent who does not want their child to gain… Read more »

apparently there is some confusion. you are putting words into my mouth. not once have i said or even suggested that dangerous drug use should be legalized or tolerated. do i think driving 100mph should be legal? i can care less. i choose not to drive 100mph, not because it… Read more »

ovlove;Are you kidding me saying the freezer is a “responsible” place for someone to keep their meth,or other illegal drugs if they have toddlers,but not if their kids are older?…..are you kidding me?…how about keeping just food,T.V. dinners and ice cubes in the freezer ?…Your defense of this case here… Read more »

i am certain that she is a repeat offender and that this will not be her first visit to the clink. it has been proven time and time again that jail and or the threat of jail, is not a deterent for addicts. JAIL DOES NOT AND WILL NOT REHABILITATE… Read more »

ovlove;With this one,sounds like an alleged user,but not a dealer..oh,wait,she was convicted of sales!….I can think of one or more that will be better off if she goes to jail for a stint.Her children,especially when they get into the freezer to eat some ice cream.And just maybe some of those… Read more »

the criminal justice system is designed to protect the publics interest. please explain how the publics interests are protected by or will benifit by sentencing this women to jail? whoever her supplier is, has already found a replacement, likewise, whoever she was selling to, has a new connection. the streets… Read more »

you are right, allergy pills are not the same as meth. My point is a drug is a drug. illegal or legal they are all drugs, and have different effects on different people. most people who use drugs are self medicating. to say that every person who uses meth will… Read more »

C’mon folks please wake up. The number 1 drug that kills more Americans is booze! I know you hate to hear it. I can hear y’all now saying it’s legal so it’s ok. If our govt. tells you illegal drugs are bad they must be the scourge of the earth!!… Read more »

ovlove;.If your trying to tell people ephedrine for colds or allergies is the same thing as Meth bought off the streets,I suggest you check the facts on that before passing on such a foolish statement on a web-site,or for that matter,passing it on anywhere.

The Aggressive Progressive
Reply to  Low-Inyo

I think ovlove was just stating the hypocrisy of the people who support drug laws, who then turn and take a substance over the counter that is clinically proven to be the same product that is deemed dangerous and illegal when the profits don’t go to corporate america… another hypocrisy… Read more »

to be specific; Heroin, Or Marijuana, Or Ephedrine to say the least all fall into the category of having medicinal benefit’s and is PRESCRIBED by your local doctor, But if found on your person without a prescription, the injustice system will have its way with you. Yes drugs are bad,… Read more »

doctors prescribe ephedrine based drugs regularly that are no different than meth. It is used for treatment of allergies, hyperactivity, fatigue and as a dietary supplement to suppress appettite. Yet some how it is viewed differently when it comes with a prescription. The fact of the matter is this, like… Read more »

@ov, While your opinion on legality of drugs is debatable, what is not debatable is the ill conceived notion that the therapeutic use of ephedrine is no different then the abuse of methamphetamine. There are many substances in our lives that can be safe when used properly but can be… Read more »

also there is not difference in how a drug cartel/gangs fight for turf, compared to how the prescription drug lobbyists and private prison corporation fight for their turf or economic revenue (keeping drug laws in place) = Both very counter-productive for the communities! And just like any other entity who… Read more »

charles. would you agree that both prescribed ephedrine and methamphedamine are equally dangerous if a small child were to ingest them?

Seeing as the concentrations are entirely different, no they are not “equally dangerous”.

That said, most meds can be extremely dangerous if misused. Humans can even die from drinking too much water.

BIG Rick;And on top of that,how many people do we know that,in order to buy cigarettes and alcohol they lower themselves to break into homes and business’,sneak around and steal from friends and family,and sometimes even commit worse crimes than that in order to pay for their habit?

. Alcohol doesn’t take over your life after your very first drink… but you hit that pipe, and it will turn you into a lying, thieving, worthless, barely living skeleton, who will say or do anything for that next hit. Knowing this beforehand…why would ANYONE take that first hit ??… Read more »

C’mon Rick If you researched which drug kills more people in the u.s. Meth isn’t even close . Research the affects of alcohol and the lives it has taken. Just because something is illegal doesn’t mean much. The War on Drugs is a joke. These people need help not jail.… Read more »

I wonder if she is kicking her self right now for not taking the deal the DA’s Officer gave her, (Drug Court). Well have fun in ICJ, I hear the food there is pretty good>>