On Tuesday, April 10 at about 11:18 am, Symon’s Ambulance was dispatched to the Tu Su Lane area regarding a male victim who reportedly accidentally stabbed himself. 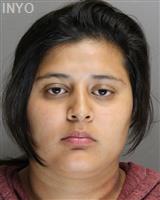 Inyo County Investigators and Bishop Police Officers responded as well.  The male victim suffered a single puncture wound to his chest and was transported to Northern Inyo Hospital.

The victim’s live-in girlfriend, 21-year-old Samantha Rios, stated the victim stabbed himself but she indicated she was not in the room at the time.

Rios was read her Miranda rights and questioned a second time about what occurred.  Rios then admitted to stabbing the victim due to relationship issues.

T-Bone….and my guess is there’s going to be more coming….and more late-night laughs…about hannity,his God and idol trump,and others in this Administration…but that’s what you get when you vote in a reality-show host with a dark past that has cheated and sleazed his way through life,thinking if you got a… Read more »

Sean Hannity being DOXXED by the deep state pretty much guarantees that your average American doesn’t have a snow balls chance in hell of not having their private legal matters put out into the public.

Sean Hannity retained the services of a criminal. There’s nothing deep state about that.

Trouble…fyi,this is called drama,and something that will probably never see a day in court,due to the fact the court won’t be able to sort it all out…could be assault,could be attempted murder..could be self defense,and all the while,the guy getting stabbed has already lied about what happened.She’s already stated two… Read more »

I agree with trouble as far as cops making up and lying to what they think may have happened but. Isn’t your “self defense” claim the same thing?

Fyi- this is called assault, and I’d feel safer if the police that make this stuff up as they go ,were off the street , not her. Probably, self defense. But they can’t prove that.

t-bone i hope none of the illegals get social security number, and have moved back to thier mother country, and im sure when that person dies the good people in their community will call ss to see that the checks stop coming, when you cant control who comes into your… Read more »

p ite, first, I can barely understand what you’ve written. You appear to be somewhat illiterate, and unfortunately that seems to affect your limited, xenophobic world view. Now, it appears you’re implying immigrants are conducting mass social security fraud, which is completely baseless. The entirety of SS fraud is only… Read more »

Tu Su Lane…why does that sound so familiar ?

Not Racist if it’s true!

pite…let’s not get too carried away,bud….”third world nation ” ?…take a road-trip down south,and starting about the Lancaster area,drive around a little bit at night and see if it’s so bad and dangerous up here….and just like down there or up here, very little to do with talk of “sanctuary… Read more »

I’m sure Low-Inyo will continue to vote for the left..
Because more immigration, higher taxes, bigger govt, and identity politics is better for all California…

Do you have any idea of the meaning behind the song you just quoted? If you did I doubt you would’ve chosen that line to support your rant. But thanks for the daily dose of irony, Buzz.

Of course I know the song…. the song is called Superconductor…

@BK,
Knowing a song (even though you apparently didn’t), and understanding a song’s meaning are two different things entirely. But since you brought up Maddow, your pal Sean makes over five times what she does. So maybe you’ve accidentally made a valid point after all. More Irony. Thanks again, amigo.

T-Bone…I think we all have a fairly good idea what p ite means by that,since he stated the word “sanctuary” in his post…and saying “third world “…I bet it has something to do with that trump-statement last year mentioning “they are rapists….murderers…they don’t send the good ones over here,etc. “…I’m… Read more »

Low, I did pick up on the rather blatant dog whistling, I just thought I’d ask for some clarity, which of course, never arrived. People like p ite and Rick O’Brian are just frothing at the mouth, now that they have a fellow bigot in the White House giving them… Read more »

According to ICSO website there was another attempted murder arrest on April, 6.
Just curious why that one wasn’t shown here on sierrawave. Maybe I just missed it.
Either way, what the hell is our little piece of heaven coming to?