By Charles James on May 28, 2020 in Fire, Government Agencies/Utilities, Mono County, News Releases 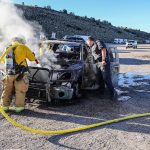 Vehicle fires are more common in the summer months when engines can more easily overheat and drivers sometimes pay less attention to maintenance. 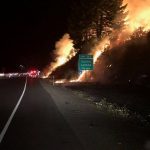 A failed catalytic converter is responsible for starting the six fires on Sept. 1, 2018, in Curtin, Oregon, burning 90 acres.

With the many visitors to the Eastern Sierra during the summer, it’s a timely reminder that many wildfires are also caused by vehicles being in accidents while driving through wilderness areas and driving off-road onto dry vegetation.

Vehicles are the third leading cause of wildfires, even more so than lightning and camp fires,  according to a 2017 study from the California Department of Forestry and Fire Protection (CalFire).

The recent vehicle fire in Benton, although on the highway, is a reminder that it is important to keep your car in good mechanical condition and keep a fire extinguisher in the car. This is especially  true when traveling in remote forested areas or areas with dry vegetation where a fire might be ignited by a vehicle’s catalytic converter. 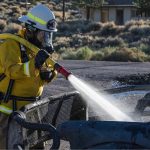 As for the vehicle fire posted on the White Mountain Fire Department Facebook page, on Wednesday, May 27,  WMFD units were dispatched to a fully engulfed vehicle fire with possible explosives on board this afternoon.

Upon arrival, a fully involved Nevada State Trooper unit was in the middle of the highway at Montgomery Pass.

It was later determined that the explosives were ammunition and road flares.

Engine 33 and 31 quickly extinguished the fire and the vehicle was removed from the roadway.

Thankfully, no one was hurt and there was no extension into the wildland areas. -WMFD Facebook Post

[SWM Note: A special note of thanks to the special men and women firefighters in both Inyo and Mono counties that are prepared to risk their lives everyday to ensure the safety of all of us that live here in the Eastern Sierra, as well are for the many visitors to the area. THANK YOU!]

Inyo County Officially Open for Fishing by CDFW on May 28
Update on: After 41 days without a COVID-19 case In Inyo County, a new positive case pops up