One of the many heartbreaks of war – loved ones missing in action and never brought home to rest in peace. Mark Noah, a pilot and owner of History Flight, came to know that sad fact and has been quoted as saying that his years of travel have made him “deeply conscious of lingering effects of war.” When he learned that more than 500 Marines were still missing from World War II on the islands of Tarawa, Noah went to work. He engaged many experts including former Mammoth Police Sergeant Paul Dostie and his cadaver dog Buster to help find the remains of the Marines. They plan to return to Tarawa this month for more work.  Tarawa is a strategically located string of islands in the Pacific where a major battle in 1943 left 6,000 Americans and Japanese dead.  The Marines did secure Tarawa, a critical advantage. 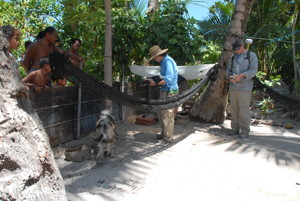 Noah said he learned a lot about missing military studying history, restoring war era planes and meeting relatives of missing people. A New York Times story on Mr. Noah revealed that he created a 62-foot long aerial photo of parts of Tarawa and then hired a small team of archaeologists and historians to start his work to retrieve the remains of the lost Marines. Asked about Dostie and Buster’s help, Noah said they have done “a great job” on Tarawa and in several European locations.

Noah said he used a “kitchen sink” type approach to his efforts – using lots of tools, including, as he put it, “Paul and Dr. Buster.” He started with historical resources and then specific locating approaches that included Buster, radar detection and excavation. 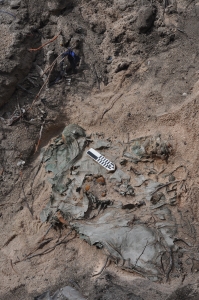 Mr. Noah said Paul Dostie contacted him after learning of his work to recover remains. Noah called Dostie “a phenomenal dog trainer.  It’s fascinating,” he said, “to see them work together.”  The first time they all worked together was in 2011.  When asked about those who are skeptical that a dog really can help retrieve bodies, Noah said of Buster, “Skeptics were proven wrong.  The evidence is deafening!” 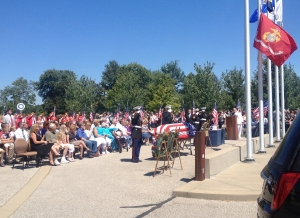 In one case, Buster alerted on a specific site, the Ground Penetrating Radar personnel verified it, a report is made to the government, and excavation revealed the remains. Noah said he hopes to return to Tarawa with Dostie and Buster later this month. (Photos show the process of discovery, the return of remains and a hometown funeral.)

May this bring peace to families. All of earth is hallowed ground and no one forever missing.

6 dislikes for “Go Buster!” ?? Grow a pair and post your comment ya cowards!! What good are you doing in this world? Unbelievable!!

Pretty good cause and story here 🙂

I was being nice for once and still got negatives. You bite!