The 4th Annual Mammoth Lakes Film Festival (MLFF) announced this year’s juried and audience award winners at the Closing Night Award Ceremony at the Sierra Event Center in Mammoth Lakes on Sunday, May 27, 2018. The festival, held from May 23-27, screened over 70 films, including 63 in MLFF’s competition categories. Each of the festival winners received an Orson the Bear Award, handcrafted by Josh Slater of Bear in Mind Carvings located in Mammoth Lakes. 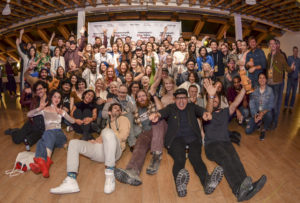 “This year’s festival exceeded our expectations on many levels. We welcomed more filmmakers, audience members, and media than in any of our other three years,” said Festival Director Shira Dubrovner. “Against the backdrop of our beautiful city, we were honored to host such an artistic collection of films that continues our commitment of bringing dynamic storytelling to our appreciative community.”

This year’s festival grew bigger in multiple ways. For example: Last year drew 80 filmmakers; this year the film festival welcomed 140 filmmakers from all over the world, including Australia, Sweden, Finland, India, the Netherlands, Canada, Mexico, Israel, Poland, and Italy. The festival sold 2,300 tickets in 2017; it sold 2,855 in 2018. There were also more North American, International, and West Coast premieres than previous years, with movies such as Damsel, Love, Gilda, and White Tide continuing on with major distribution contracts.

“The number of attending filmmakers from all over the world and the quality of their work, combined with the involvement of the Mammoth Lakes community, brought to life a series of scintillating events and thought-provoking discussions at this year’s festival,” said Festival Programmer Paul Sbrizzi.

This year’s full list of Juried and Audience Awards are:

This year’s jury consisted of:

“It has been my privilege to be a part of the Mammoth Lakes Film Festival since it’s conception,” said Documentary Features jury member Allison Amon (EVP Sales & Development, Bullitt). “The festival continues to grow both in scope and reputation, and it is incredibly inspiring to be here in the most beautiful landscape and surrounded by the creativity the festival attracts.”