Inyo National Forest fire personnel removed dead hazard trees at the Lone Pine Cemetery last week. The felled trees will be bucked and set aside for public use.

Fire crews need training for proper and safe tree falling and had set aside a date to meet this requirement at the beginning of their season. However, locations on the forest where training could occur remain under snow this year.

Crew members reached out to the local cemetery where they had noticed numerous dead trees along the perimeter and learned that the cemetery did not have the staff or funds to address this identified need. 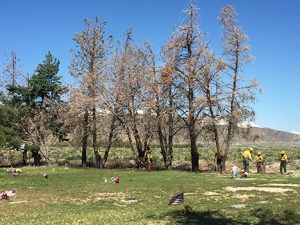 This solution provides a needed community service while also providing the required training for fire crews.

Inyo National Forest staff, including Engine 41, Battalion Chief 4, the helitack crew from Helicopter 525, and Crew 4 will be working on this project with help from Cal Fire and the Independence Engine Crew.

The mission of the U.S. Forest Service, part of the U.S. Department of Agriculture, is to sustain the health, diversity and productivity of the nation’s forests and grasslands to meet the needs of present and future generations. 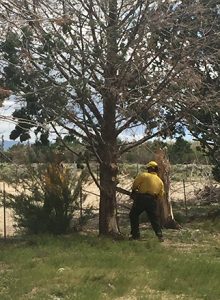 The agency manages 193 million acres of public land, provides assistance to state and private landowners, and maintains the largest forestry research organization in the world. Public lands the Forest Service manages contribute more than $13 billion to the economy each year through visitor spending alone. Those same lands provide 20 percent of the nation’s clean water supply, a value estimated at $7.2 billion per year.

The agency has either a direct or indirect role in stewardship of about 80 percent of the 850 million forested acres within the U.S., of which 100 million acres are urban forests where most Americans live.