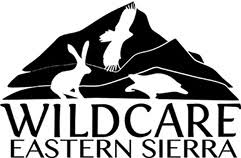 The fall equinox has brought two Great Horned Owls, a Red-shouldered Hawk, a Northern Saw-whet Owl, young raccoons, two Common Loons, a White Pelican, Common Ravens, two Mallards, an Eared Grebe and more to Wildcare Eastern Sierra. These patients have been keeping Wildcare staff and volunteers masked and keeping busy. They struggle to breathe the thick gray, smoke-filled air through their masks.  Rescuers remain safely in their cars while Wildcare workers move patients from the back of the vehicle into the Center.

Prolonged heat and drought are disrupting fall and early winter patterns, resulting in an unusual transition from our busy “baby season” to our quiet season. Many birds and mammals had late babies, resulting in continuing need for “baby care.” Many juvenile birds of prey (Red-tails and Red-shoulders, Cooper’s and Swainson hawks) have been admitted suffering from starvation because prey species (mice, rabbits, quail) were born or hatched out of synch with the raptors. 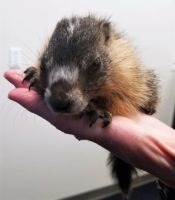 Mother Nature has presented WES with unusual and challenging cases. Marmots:  A Yellow-bellied Marmot was spotted in a Mammoth neighborhood. These large ground squirrels normally live at higher elevations. They have a bad habit of hitching rides in vehicles and disembarking at lower elevations. This Marmot was humanely trapped with the intention of returning it to its proper habitat but was found to be a nursing mother. Placed in a Wildcare high-elevation cage, her babies were soon rescued and joined her. (One died; two survived.) Else-where, a Wildcare volunteer was raising an orphaned Marmot baby that had been rescued in the western Sierra. Once he was weaned, he was gradually introduced to the Marmot mom and her 2 young ones. Miraculously (this had never been done before), the Mom accepted the single orphan into her family! The family was successfully released in proper Marmot territory. 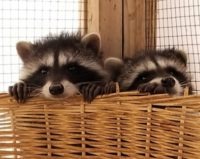 Raccoons: A female Raccoon in Lone Pine gave birth nearly 6 months later than usual to two youngsters. She disappeared, probably killed by a car, leaving the orphans alone in a back yard. They were rescued and are now being raised at Wildcare. We offer puppy chow, cooked chicken and eggs, grapes berries and apples, rodents, fish, and superworms. In the wild, raccoons eat a wide variety of foods:  fruits, plants, nuts, berries, insects, rodents, frogs, eggs, and crayfish. When available, they dig grubs from people’s lawns and eat food left outdoors for cats and dogs. They will sift through household trash if it isn’t kept in covered cans. When these raccoons are old enough, we will return them to the wild, far from people. 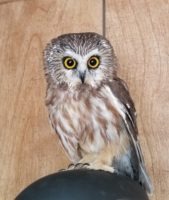 Avian fall migration, although delayed in part by heat and drought, has been underway for some time.  In the West, multiple, long-lasting fires have engendered nearly continual heavy smoke. Visual clues, along with magnetic fields, are a vital part of the migration process. Unable to see geographic landmarks, large numbers of birds have been thrown off course. Most recently, several migrating young American White Pelicans, Common Loons, and an Eared Grebe came down off course, landing on parking lots, roadsides, and in swimming pools

With the help of volunteers working outdoors, reduced staff at the Center continue distancing and sanitizing while caring for orphaned wild birds and mammals found by residents, visitors, and agencies. Several calls a day come in: caught on barbed wire, covered with sap and leaves, broken limbs, mother killed. Shorter days, colder weather, less food result in human-animal conflicts: Juvenile raccoons digging for grubs or stranded at the top of a telephone pole, hungry squirrels and rabbits searching gardens for food.

Whatever the problem may be, Wildcare remains ready to help; eight hours a day, seven days a week, 365 days a year. Don’t hesitate to call:  760-872-1487 or visit the Wildcare Eastern Sierra Facebook page.

Your donations of time and money to support our efforts are greatly appreciated.

Free Flu Clinic scheduled for Sunday, Nov. 8th, in Lone Pine and in Olancha
Caltrans to Close Mountain Passes Ahead of Winter Storm | From Fires to Rain and Snow!
1 Comment
Newest
Oldest Most Voted
Inline Feedbacks
View all comments

Was wondering how the animals were doing during these times. Did not realize it was so extreme.