By News Staff on September 4, 2019 in General Misc. Stories

Wildcare Eastern Sierra has admitted several young Cooper’s Hawks these past few weeks. Cooper’s Hawks are birds of prey, members of the Accipter family; they primarily hunt other birds. Usually the last raptor species to breed each season, this year parents were exceptionally late in hatching out their young.

On  July 23rd, Wildcare received calls from Crags Campground at Twin Lakes, southwest of Bridgeport.  The campground manager had received several reports from guests of a bird of prey on the ground, most commonly described as a “baby Bald Eagle.”  Responding to our urgent call, Wildcare volunteer Gary, from Lee Vining, headed to the campground where he located the downed bird. It was a young raptor, but definitely not an eagle. Gary was unable to spot the nest from which it had come. Our “Pony Express” kicked into action. (One volunteer transports a patient partway toward Keough’s, a second takes it another leg, and often, yet a third gets it to the care facility.)

Upon arrival at the Center, the “eagle” was identified as a nestling Cooper’s Hawk, only a few weeks old, and uninjured. Because of our inability to find the nest, he could not be returned to his parents. He would settle in for a long stay while growing in his feathers and learning to fly and hunt.

A few weeks later, on August 7th, a random thunderstorm, complete with hefty gusts of wind, whipped through the Bishop Country Club course. Shortly thereafter, Stephen and his golfing companions spotted downed branches and two fuzzy white birds on the fairway grass near a tree. 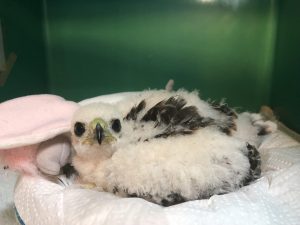 Although missing his deceased sibling, the Country Club Cooper’s snuggles in his warm “nest” in the critical care ward.

Both baby birds were placed in a container and held at the club office. The Center is only a few minutes from the Country Club and a staff member promptly left to pick up the unlucky nestlings.

One of the siblings was dead on arrival. The survivor was healthy and uninjured. The damage to the nest, and loss of one sibling, made reuniting her with her parents an unlikely possibility. And, because she was a few weeks younger than the earlier Cooper’s arrival, she would have to grow up by herself.

(Coincidentally, two days after her arrival, a mother and son who were camping at Keough’s stopped by to say “Hi ” to our wildlife ambassadors, Razzle the Raven and Red-tailed Hawks Spirit and Bullitt. The young man excitedly told me that he had helped rescue a “baby Bald Eagle” at Crag’s campground! He was even more excited when he learned that the “eagle” was doing well at the Center. We gave him a quick peek at the little Cooper’s and a big “Thank you!” for the part he played in saving her life.)

During the next few weeks, two other young Cooper’sand one Goshawk (from the same Accipiter family)–were admitted.  Sadly, like many raptors (and other young teenage birds), they had been unable to hunt well enough and were starving. Despite our best efforts, they could not be saved.

Here at the Center, the Twin Lakes hawk is flying well in a 25-ft. aviary; the Country Club Cooper’s has recently begun flying and perching in a smaller cage. In another week or so, we will introduce the two youngsters to each other. They will continue their conditioning together until ready to be released.