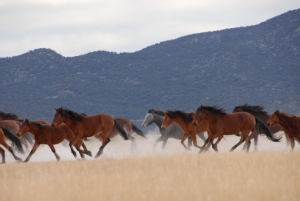 A month ago, a local source expressed concern about the future of a wild mustang herd near Montgomery Pass.  Reports circulated that the Department of Fish and Game might destroy some of the horses.  Local Fish and Game refused to return phone calls, however, now, the Forest Service has reported on a recent meeting over the wild horses and assures the animals’ fate is secure at this time.

An agency meeting took place recently to disuse the Montgomery Pass wild horse herd.  According to INF Public Information Officer Nancy Upham, the meeting was well attended by “BLM, Forest Service, NRCS, CDFG, researchers and local landowners.”  Upham said that after a lot of discussion it was determined that there are issues, but that there is not a significant enough problem at the current time to place it higher in priority over the large number of other resource issues on everyone’s plates.

Upham said that there is no truth to the earlier rumor that the horses would be shot. Upham said, “This is not how over-populated herds are dealt with and has never been discussed or considered in any way for the Montgomery Pass herd.”

Inyo National Forest Mammoth District Ranger Jon Regelbrugge conveyed the information that the primary impetus for the recent meeting was the recognition that the interagency group that works on coordinating the management of the wild horse herds hadn’t met for quite awhile.

Regelbrugge said that after much discussion, it was decided that the herd is in good shape and is within the targeted population level. Officials said that most of the discussion circulated around the question of geographical distribution of the herd.   There are some concerns that some bands are causing some impacts due to their distribution and the time that they are spending in some areas.

The group talked about prospective solutions to this issue of distribution and individual members are going to continue to work on potential solutions. The group decided that they will meet again, but no date was set for the next meeting.

15 Responses to Agencies met to talk over wild mustang herd