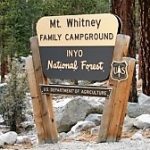 At this time, there are no reported injuries or reports of missing individuals. 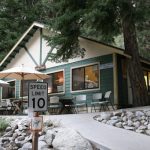 Mt. Whitney Store was not damaged.

There were approximately 40 vehicles parked in the area. Vehicles were covered in dust, but there did not appear to be damaged. The Whitney Portal store was also covered in a blanket of dust. The Inyo National Forest has not begun issuing permits to hike Mt Whitney.

Aerial reconnaissance, as well as reports from hikers identified several additional slides; one directly above Lone Pine Lake, one about a quarter mile above Lone Pine Lake near the main trail, and three slides on the face of Mt. Whitney. It is unclear at this time if the Mt. Whitney trail has been damaged. Based on dust seen from the Owens Valley floor it appears that most canyons, including trailheads, south of Kearsarge Pass had at least minor rock-slides  triggered by the earthquake. 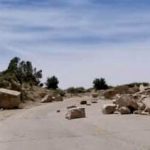 Whitney Portal Road is Closed to the Public

Due to several smaller aftershocks throughout yesterday afternoon and evening, only a preliminary search could be conducted near the slide zone. After an evaluation by a US Forest Service geologist this morning, the intention is to send in search and rescue teams and canines to check each of the debris fields.

If it safe, Inyo National Forest Wilderness Rangers will begin assessing if there is damage to the trail systems in the area. Yesterday’s initial assessment shows substantial damage to a section of the National Recreation Trail (that starts at Lone Pine Campground and ends in Whitney Portal). The focus today will be on the Mt. Whitney Trail. At this time, the Mt. Whitney Trail, The Meysan Lakes Trail, and the North Fork of Lone Pine Trail (Mountaineering Route) are closed until further notice. Permits for day and overnight summits of Mt. Whitney will continue be cancelled until further notice. 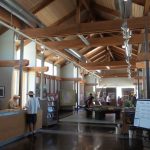 The Inyo National Forest will also coordinate with Sequoia and Kings Canyon National Parks. Long distance hikers were being permitted to exit at Whitney Portal if their itinerary included that. Efforts to determine if there are hikers that need assistance to safely end their hike will be implemented. The forest is also completing an engineering assessment of the Eastern Sierra Visitor Center in Lone Pine to determine that it is structurally safe. There will need to be clean up of the building once that is determined.

Whitney Portal Road has been closed to the public. All campgrounds above the closure have been evacuated and will remain closed until further notice.

MLT Deals with “New Normal,” Whatever that is…
For the Love of Dogs | USFS uses rescue dogs to assist in Earthquake areas