By News Staff on November 14, 2012 in Government Agencies/Utilities 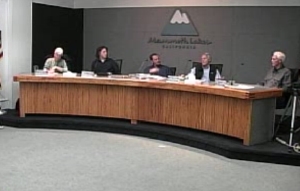 In three weeks, as it stands now, the Mammoth Town Council will make the final decision on how to restructure their town government. At a special meeting Tuesday night, the Council heard about the issue of how to save Whitmore Pool with Measure R tax money, how to raise taxes and get out of the huge debt, how to avoid trouble by not cutting police, and how business leaders continue talks over a Business Improvement District.

Recreation Commissioner Bill Sauser said commissioners themselves are divided on what to do. John Wentworth of Mammoth Lakes Trails seemed to support a temporary use of Measure R money on Whitmore. 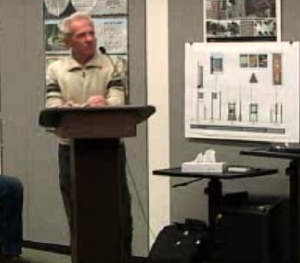 Dieter Fiebriger, long-time citizen, said of the whole money mess, “Stop finger pointing. Pay for it.” He suggested a specific 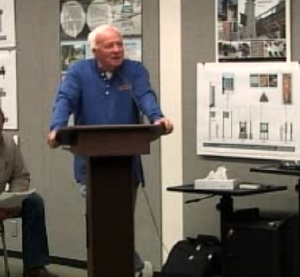 tax that would tap everyone and end it in five years. “Pay it off,” he said, “so we won’t lose our public safety and other needs.” Another long-timer, Ken Coulter said if police cuts go forward, “We are going to get into trouble.”

Councilwoman Jo Bacon did not support a loan from Measure R since it would be very difficult to pay it back. She did not rule out use of Measure R money. Councilman John Eastman did not support use of money from any tax measure but said the Town could look elsewhere. Councilman Michael Raimondo supported a two-year plan and use of Measure R. Councilman Rick Wood said only, “I’m still listening.” Mayor Matthew Lehman said he would support a two-year use of Measure R or use of other money if it becomes available. Lehman said he wants to see Mammoth’s budget grow from $17 million a year to $25 million per year.

Marianna Marysheva-Martinez spoke briefly again about possible taxes that the public could vote on. She said they would have to be brought forward by January or February for a special election. She and Tourism Director John Urdi spoke of the Business Improvement District idea. Check out our website for Urdi’s complete explanation. Bottom line – this would mean a possible 1% assessment on lodging, restaurants and some retail to raise $1.4 million for air service subsidy and some marketing.

The Council’s next meeting, at this point, comes up December 5th.

A thought. Most days, Mammoth is a sleepy town and a smaller police force should be able to keep peace. However, we all know the town can swell with partiers, and when it does 6 officers is simply not going to be enough. A scenario in which hundreds of drunken… Read more »

The council continues to go down the wrong path. Their number one priority should be to provide basic services and keep MLPD officers on the payroll.

Why two managers? Because the MLTC hired an ineffective Town Manager, one Dave Wilbrecht, who knows about as much about number crunching as he knows about astrophysics. Consequently, they had to get MMM back from Pasadena to run the numbers for him. Let’s not forget that, right after he started,… Read more »

And furthermore: when it come down to Mammoth vs a flighty airport condo developer, court or no court, the town must prevail. Developers are a dime a dozen but Mammoth is quite special, its One of a kind.
Protect the town, that is what the council must do.

MJA – You are correct. Developers are a dime a dozen in Mammoth Lakes.

And please don’t forget Matthew Lehman, who is the head of our town council, is …
you guessed it – a developer.

Its all over except there is no money to pay.
Now who would sign an agreement like that.
Is that even legal?

And as for Mammoth signing another agreement with the same guy who took Mammoth to bankruptcy over the last agreement, ah, that doesn’t seem right either.
What will this new one cost Mammoth in the future, 100 million more?

Rather than taxing and cutting anything in Mammoth simply cut the payments to Ballas and his money grabbing acquisition corporation and leave the town alone. Cut out the problem not the necessities.

MJA – What part of the fact that ignoring MLLA is not an option at this point don’t you understand?? TOML has entered into a binding settlement agreement with them, underlying which is a final court judgement. It’s pretty simple: TOML lost, TOML stalled, and now TOML must pay. I… Read more »

Binding agreement?
Nothing is bound yet.
Cut Ballas and his money grabber corporation and leave the town be.

The Superior Court and now the Bankruptcy Court are in the process of amending court documents to accomodate the signed agreement
among MLLA, Ballas and the Town. This is the prelude to bankruptcy dismissal. It’s all over, basically.
Benett Kessler

So i guess what you’re saying Benett is: Mammoth signed another agreement with Ballas this time to pay him and his sue happy friends 50 plus million dollars without a single condo being built and without working out the details first? Details like where the money is coming from, Right?… Read more »

Exactly, Bemused. MJA is like a broken record with his/her nutty plan of not paying our debt. No one likes it, but we owe the money and have to find a way to pay it. Period.

ONE voice
Reply to  Jen

Jen, WE as a community did elect these council members, but we did not make all of these very poor decisions. We as a town should not have to support the Greed of Mr. Ballas. We have already paid for these services via taxes etc. that are now being threatend.… Read more »

Jen
Reply to  ONE voice

I’m with you, I truly am, but the reality is the bankruptcy judge told us to mediate with the other side, which we did. We could have taken a chance and declined their terms, but the judge at that point could have told us to pay the entire amount. From… Read more »

And she doesn't even live here

Two town managers at $200K per year plus expenses and (for MMM) free housing, that’s right, MMM even gets a free home to live when she’s in town.
Somebody has sold somebody a bill of goods.

Please explain to me why she is still here? How long is here contract with the Town?

I think her contract goes to or through March.
BK

Dumb comments of a few folks
Reply to  Benett Kessler

These posts make me sick. If town residents want to have an effect on the decisions the town makes then they should bring their ideas through proper avenues, posting negative comments about towncouncil members and employees in a non-productive manor (through these types of comments on websites) is just faceless… Read more »

This poster clearly is not aware of how this Town Council functions: One guy tried to use his influence to get a relative hired Another guy is an attorney his with fingers in lots of pies The two above have been around forever A new guy is a land developer… Read more »

J.J.
Reply to  Dumb comments of a few folks

These post accomplished one more thing than the town survey. Drink two beers and call me in the morning.

upthecreek
Reply to  Dumb comments of a few folks

if they make you sick..
Why do you read them?

Ken Warner
Reply to  Dumb comments of a few folks

You make a good point. The people here complain about their tax money being spent inappropriately when they have the right to petition for a referendum to repeal those taxes. If the people take away the taxes that they voted on themselves, then those moneys can’t be spent. Repeal U… Read more »

Why 2 town managers?
Reply to  upthecreek

MMM reminds me of my corporate days when some people were brilliant at making power-point presentations complete with graphs and such and bombarding the audience with number and figures, more numbers and figures ad nauseum, that leaves the audience confused and numbed-out. At the end of her mind-numbing and confusing… Read more »

That’s a question for debate. Another point – we really don’t know what Ms. Martinez has done. The real work in the past year on the MLLA issue was all behind closed doors and privately conducted.
BK

Good point, but at least she apparently did something. What do we really know about what Wilbrecht does other than the pap that’s in his job description? What makes him so valuable as to justify $300,000 a year in salary and benefits, more than any comparable government employee in Mono… Read more »

“What do we really know about what Wilbrecht does other than the pap that’s in his job description?”

Be nice to him …. He needs a nice warm office to rest until he can qualify for his Full (HUGE) Public Pension and benefits package.

“he’d just retire on his inflated PERS pension, courtesy of the Town, and move back to Washington to avoid state income taxes.”

Typical Mammoth, get rid of the work horses but keep the old carts.