8/05/2020 Update: Peripatetic Fire Crew! Looks like our local WMFD firefighters are getting lots of experience. According to the WMFD Facebook page, they were called off of the Apple Fire to respond as immediate need resources for help on the Stagecoach Fire, near Lake Isabella, Calif.

According to the White Mountain Fire Protection District Facebook Page, they are responding as part of a local Task Force tasked with assisting our neighbors to the south in bringing the Apple Fire under control. At last assessment, the Fire was over 26,850 acres, and nearly 8000 people have been evacuated and minimal containment, last shown at 20%.

There are 2,500 firefighters working the fire. Several homes and structures have been burned. 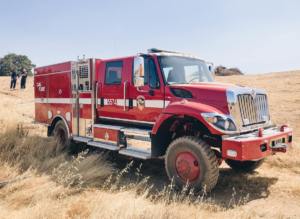 A Type 3 fire engine is what you’ll see if you live in a mountainous or rural community. These (typically) four-wheel drive apparatus are designed for rapid deployment, pick up, and relocation during wildfires.

The cause of the fire has been determined to be hot objects shooting out of a tailpipe. There were several witnesses.

Go for it at WMFPD, this should help you improve your budget.