By News Staff on November 6, 2014 in Government Agencies/Utilities 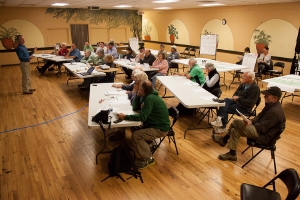 MAMMOTH LAKES, CALIF., November 4, 2014—The Eastern Sierra Recreation Collaborative (ESRC) held two gateway community meetings recently to engage recreation enthusiasts in a dialog about their experiences on the Inyo National Forest.  The meetings were held as part of the ESRC’s meeting series to prepare for participating in the Forest Management Plan Revision process currently underway on the Inyo NF.

Over twenty-five community members from the region attended the Tuesday, October 28th meeting in Big Pine, Calif. and over fifty participants attended the Thursday, October 30th in June Lake, Calif.  Meeting participants were led through a series of mapping exercises to identify areas they recreate on and describe their experiences.  Building on the recreation values developed at the first ESRC meeting, participants also shared insight about building symbiotic relationships between multiple uses of Inyo NF resources.  Ideas such as increased education and communication among diverse users along with developing a culture of stewardship and respect were shared in spirited and enthusiastic group discussions.

With three meetings completed, the ESRC will hold its fourth meeting on Wednesday, November 12th at Cerro Coso College in Bishop, Calif.  The meeting will begin at 5:30pm and end at 8:30pm.  Attendees at this wrap-up meeting will participate in a series of exercises to develop a recreation strategy to be used as a guideline for reviewing preliminary alternatives prepared for the Inyo NF’s management plan revision process to be released mid-November 2014 and draft alternatives scheduled to be released by the Inyo NF in April 2015. 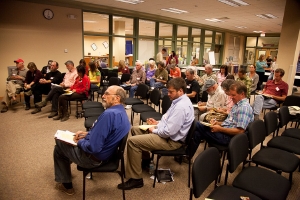 All ESRC meetings have been open public forums intended to provide diverse recreationists and stakeholders throughout the Eastern Sierra with an opportunity to collaboratively develop a regional voice representing the area’s recreation economy to help inform local, state and federal planning and policy efforts. The efforts of the ESRC are intended to support the Inyo National Forest as it makes its first revision to the Forest Plan since 1988.

The public is encouraged to participate in the final wrap-up meeting in order to work together to elevate and define the value of recreation for the region and the importance of its appropriate representation in matters of public policy.  Notes and photos from previous meetings are posted at www.eastsierrarec.org.  The agenda and documents to review for the wrap-up meeting will also be available on the ESRC website.

The ESRC is a grass roots effort launched in 2014 by Eastern Sierra recreation enthusiasts committed to economic diversification and to policies that support sustainable recreation management. Its purpose is to enhance regional recreation opportunities through focused engagement and collaboration with community stakeholders and the gateway communities of the Eastern Sierra.

Water bills are on their way for Lone Pine and Independence
Ebola planning: low risk