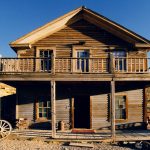 The Friends of Cerro Gordo Ghost Town went online to thank everyone calling and contacting them since the devastating fire. Around 2am on June 15th, 2020, a fire broke out in the historic American Hotel. The fire then spread to the Crapo House and the Ice House located adjacent to the hotel. No one was hurt in the fire.

The group is making new plans, stating that they “have literally felt like we have lived the old histories we have dug up…and fortunately we can still keep those histories alive with written and oral records.”

Cerro Gordo was originally established in 1865. By 1868, it was California’s largest producer of silver. In Spanish, Cerro Gordo translates to “Fat Hill.”

Friends of Cerro Gordo have started a GoFundMe page, Help Rebuild The American Hotel at Cerro Gordo, to raise $500,000 to rebuild the historical hotel using original plans they have of the hotel built in 1871. It will be. The hope is that it will be based on the original design and up to modern code, so people can stay in the American Hotel and cook and eat meals at the Saloon.

The Friends of Cerro Gordo Facebook Group noted that Fire is the biggest danger of an old town…especially on an isolated desert mountaintop without water, and referenced the ghost town of Bodie with which it shares some similarity in that much of that town was destroyed by fire in the past.

Stayed tuned for what may happen in the future. Like the Phoenix, Cerro Gordo may rise from the ashes.