It’s back. The water table in parts of West Bishop is not just high, it’s popping through the asphalt, turning lawns into bogs and invading garages. 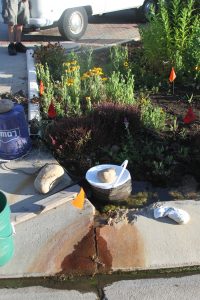 Ron Lawrence’s submersible is pumping 2,000 gallons a day out of his garden.

Ron Lawrence on Carol Lane has a pump pulling 2,000 gallons a day out of his yard. A neighbor across the street is waiting for the water to recede so he can fix his irrigation line. A resident on Barlow is worried his home’s foundation is being damaged from the water running close to the surface under his slab and through his garage. Everybody’s worried what this will do to their property values.

If all this sounds familiar, it is. In the spring of 2014, following a winter with little if any water in a ditch system that brings creeks and ponds to homeowners, a winter when older, shallow wells were running dry, the same thing happened. Back then, County Water Department Director Bob Harrington thought one explanation was a perched aquifer: a water body held near the surface by a layer of clay or a big bubble of air. In response to a cry for help from West Bishop resident Todd Vogel, Harrington put his explanation in an e-mail. 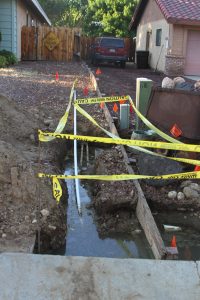 The owner of this home is waiting for the water to recede so he can replace his sprinkler line. Earlier this week, the groundwater was up to the top of the board.

Why did this weird aquifer pop up in ’14 and again this spring? Harrington and other residents think it was the waterless winter of 13-14 when residents were encouraged to clean out their ditches and ponds. What they may have ended up doing was removing a natural organic seal that allowed the spring run-off to absorb rapidly into the shallow aquifer. Harrington’s recommendation was to line ponds and ditches and install French drains.

To back track a little farther, during the second year of drought, 2012, the reservoirs at South Lake and Lake Sabrina were dropped to historic lows in compliance with irrigation requirements outlined in the Chandler Decree. That left little water to keep the creeks and ponds flowing through the winter of 2012-13.

Since then, the Los Angeles Department of Water and Power and Southern California Edison have made an effort to keep enough storage in the reservoirs to keep the ditch system at least damp. For whatever reason, the high water tables didn’t rear their little puddles last spring. 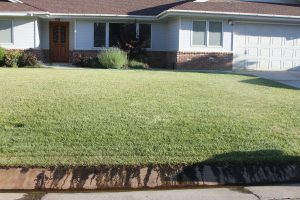 Back to the present. The Bishop Creek flows out of SCE’s Plant 6 have consistently exceeded the Chandler mandates, but nobody but Mother Nature can be blamed for that as former SCE employee Burt Almond explained at Tuesday evening’s meeting of the Bishop Creek Water Association. According to Almond, SCE was holding flows out of the reservoirs to 12 cfs, the number required to maintain the fisheries. The culprit was the uncontrolled flows out of North Creek. “The run-off is coming like gang busters,” he said. Almond said Lake Sabrina could reach capacity and water in South Lake is to the toe of the dam. “That’s the first time in five years,” he said. All this is good news, if it weren’t for the flooded basements.

The BCWA has encouraged folks to line their ponds. For now, the association’s Rock Baker is trying to balance a nice flow of water in the ditch system with water where nobody wants it. He’s experimented with taking water out of the ditches or asking residents to divert water in their ditches so ponds won’t fill up. Then wait and see if the standing water recedes. One resident ran a submersible pump for 72 hours but the water under his home is still there.

Don Coons suggested, strongly, that LADWP pay for a hydrological study. Another resident pointed out that Harrington’s recommendations should be heeded. Association Chair Gene Coufal recalled hearing of high groundwater issues in West Bishop in the 60’s. After the meeting, lifetime West Bishop resident Daris Moxley said McLaren used to be a swamp. But both areas have been heavily developed.

Pat, nice write up. I agree with all you said except I am wondering how velocity of flow reduces the amount that seeps into the ground.

I’m thinking back to Highland, Barlow, Rocking K, Lazy A other west Bishop water problems of the past I remember (1950’s) and those residents I knew during runoff seasons and what they may have said. Also, Habeggers, below Mt. Tom have had very soggy situations and some buildings were built… Read more »

TIs can’t be true, because we are on a Drought, DEP says so! This story is just peddling fiction!

There are conditions and there have been events that defy logic regarding Bishop Creek beginning with the 2013 runoff year. While Chandler Decree required flows were met and exceeded in the months of April – Sept 2013 runoff year, there was insufficient storage in South and Sabrina to maintain those… Read more »

Personnally I think DWP has figured out a way to siffen off our ground water. Why didn’t all this happen during other droughts? Why has DWP place rocks all along the canal east of Bishop?

For anyone to blame the residents for this is foolish!

Who Knew
Reply to  Trouble

Seriously Trouble?? This is the trouble you are gonna stir up today?? Rocks placed along a canal, river, aqueduct, etc are called Rip Rap… Its used to prevent the erosion of the banks.

noun: rip-rap : loose stone used to form a foundation for a breakwater or other structure.

Meanwhile, on the next streets over (to the south), ponds are still empty. They open the flow, fill up the creek/ponds…then stop the flow and let the creek/ponds dry up..over and over and over. Maybe try diverting that excess flow that is causing problems, over this way so we all… Read more »

I enjoyed reading this Sierrawave.net. it feels like sometime was given to this story. Thank you. The best part of this story is reading all the so called “players” in this serious problem, who are not sure who to blame or what to do for that matter. So they decide… Read more »

there was a reason west bishop was a swamp before door nobs were planted.surface water