By News Staff on June 19, 2015 in Government Agencies/Utilities

Wayne Harvier 74: passed away peacefully on Friday June 12th 2015, in Ontario, California, with wife, Norma Harvier and his children by his side. 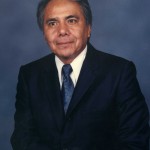 Wayne grew up in Big Pine, California and went on to attend University of Nevada and serve in the United States Navy. He later settled in Ontario, California with his wife and four kids. He was a hard worker and took pride in providing for his family. After many years of truck driving, Wayne retired in 2001. He was an avid golfer and enjoyed participating in golf tournaments. Wayne also enjoyed fishing and spending time with his grandkids. Friends and family will remember Wayne for his humor, strength, and innate sense of protection for those he loved.

Funeral Mass will be held at 10am on Saturday June 20th 2015, at Our Lady of Perpetual Help, located at 849 Home Street, Bishop, CA. 93514. Interment will follow at Woodman Cemetery in Big Pine, CA and repast to follow at the Alan Spoonhunter Memorial Gymnasium located at 1050 South Richard Street, Big Pine, CA. 93513.