By News Staff on May 15, 2013 in Entertainment/Local Events/Activities, General Misc. Stories, Public Event

A film with local ties, Watershed, will be show twice this week in the Eastern Sierra, free screenings Thursday in Mammoth Lakes and Friday in Independence. 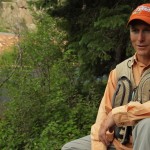 The local tie is Forrest Pound, who grew up in the Owens Valley and is a former employee with us here at Sierra Wave – we talked to Forrest about Watershed, which was Executive Produced and Narrated by Robert Redford and Directed by award-winning filmmaker, Mark Decena, WATERSHED tells the story of the threats to the once-mighty Colorado River and offers solutions for the future of the American West.

As the most dammed, dibbed, and diverted river in the world struggles to support thirty million people and the peace-keeping agreement known as the Colorado River Pact reaches its limits, WATERSHED introduces hope.

Can we meet the needs of a growing population in the face of rising temperatures and lower rainfall in an already arid land? Can we find harmony amongst the competing interests of cities, agriculture, industry, recreation, wildlife, and indigenous communities with rights to the water?

In WATERSHED, we meet Jeff Ehlert, a fly fishing guide in Rocky Mountain National Park, Colorado rancher Dan James, Delta restoration worker Edith Santiago, Navajo Council member Glojean Todacheene, Rifle Colorado Mayor Keith Lambert, Los Angeles native Jimmy Lizama and a group of Outward Bound teens rafting down the Colorado River as they all reflect a compelling new water ethic—one that illuminates how letting go of the ways of old can lead to a path of coexisting with enough for all.

The Redford Center created WATERSHED as a inspirational social action tool for people who want to engage. Promoting personal water conservation pledges of 5% – symbolic of the small amount of the rivers’ flow required to reconnect the river to its delta – and garnering donations to help purchase the water rights necessary to restore the connectivity, WATERSHED is a central tool in a larger grassroots effort focused on saving the Colorado River and supporting the communities throughout the river basin.

Sweeping through seven U.S. and two Mexican states, the Colorado River is a lifeline to expanding populations and booming urban centers that demand water for drinking, sanitation and energy generation. And with 70% of the rivers’ water supporting agriculture, the river already runs dry before it reaches its natural end at the Gulf of California. Unless action is taken, the river will continue its retreat – a potentially catastrophic scenario for the millions who depend on it.

“Watershed” will be shown Thursday at the Edison Theatre in Mammoth Lakes – starting with an introduction by Forrest Pounds at 5:30 pm – the film screening at 6 and a panel discussion at 7, with panel members author David  Carle, Forrest Pound, filmaker Jenna Cavelle and Big Pine Tribal Environmental Technician Jackie Valasquez.

Friday, Watershed will screen at the Independence Legion Hall at 7 pm – call 760-878-0258 for more information.

For the curious (and ignorant — like me): http://www.thefreedictionary.com/dibbed dib [dɪb] vb dibs, dibbing, dibbed (Individual Sports & Recreations / Angling) (intr) to fish by allowing the bait to bob and dip on the surface [perhaps alteration of dab1] Collins English Dictionary – Complete and Unabridged © HarperCollins Publishers 1991,… Read more »