The numbers tell the story. The listing of Owens Valley water uses indicates a reduction across the board, but none as draconian as the 66-percent reduction in irrigation water provided to area agriculture, down from 49,000 acre-feet in a typical year to 16,500 acre-feet this runoff year. 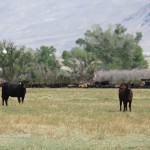 The numbers are included in the Los Angeles Department of Water and Power’s Owens Valley operations plan and will be the topic of conversation at Tuesday’s “Talking Water Workshop” at the Inyo County Board of Supervisors meeting, scheduled for 1:30 p.m. Enhancement Mitigation projects are down from 10,000 acre-feet in a typical year to 9,500; recreation, from 9,000 to 7,400; the Owens Lake dust mitigation project is down from 75,000 to 60,700 and the Lower Owens River Project, down from 18,600 to 15,300 acre-feet. Both the Owens Lake and LORP quantities are slightly higher when compared to the 2014-15 runoff year.

“We can’t beat up on the city,” said Lone Pine cattleman Tom Noland. “It just doesn’t look like the water’s there.”

Ranchers dependent on surface water will be hit the hardest, county Water Department Director Bob Harrington told the Water Commissioners at their April 23 meeting. Besides praying for rain, area ranchers’ hope for survival may well depend on the Supervisors’ workshop as they have cut their herds to the quick.

As Scott Kemp put it, ranchers are trying to preserve the genetics of their cattle. Rebuilding a herd is a multi-year process; having a proven breeding program is the beginning.

Kemp and Noland agree on what has to be done. “Take water off the Owens Lake,” Noland told the Water Commissioners. “What do people here value? We can put up with a little dust.”

In an earlier phone conversation, Noland acknowledged that reducing the base flow on the LORP could free up irrigation water, provided the Memorandum of Understanding partners could agree to a one-year change.

The reality for ranchers is grim. Herds have been cut by as much as 70 percent. Kemp’s were cut 40-percent prior to this year; now he’s looking at cutting that number in half. Mark Lacey’s operation had private lands near Bridgeport and Crowley Lake as safety valves, but now those grazing fields can’t support significant numbers.

“We’re down 60-percent from five years ago,” he said. In mid-May, he’s moving cows to Nebraska. “The Owens Valley’s been resilient,” he said, noting that six of the last seven years have seen drought conditions. “But you can’t expect the land to rebound quickly. The forage has been taxed.”

According to Lacey, 2014 beef prices were high enough to not reflect the drop in herd sizes, but that won’t be the case in 2015. “Last year, the market reached its height,” he said, “now exports are down…. We can only hope for the best and plan for the worst.”

Land Of Little Rain…..and previously (before LADWP) LOTS of runoff water from our mountains.

Look on the bright side… If the OV turns into a desert, there will be plenty of room for the OHV people to have fun.

Yes, when I worked in the 1980’s with local seniors, one of whom attested to the fact that when he and his parents travelled to the Lone Pine and Independence areas from LA, and there were sections of the road that were fully tree lined and there were wooden bridges… Read more »

We live in a DESERT! it gets dusty. The rest is all political BULLS*IT. More laws more restrictions. It has nothing to do with what is right or conservation, its all about money and who ever has the most. everyone else will suffer. These department heads, goverments, ranchers etc. all… Read more »

You hit the nail on the head! It is exactly all about money and who has it and who suffers. You know who else lives in a DESERT? Everyone in the Los Angeles basin.

A desert now, but 100 years ago the old highway (395) was located on the west side of the valley at the base of the foothills. You’ve likely driven parts of it if you’ve ever taken County Road between Wilkerson & Big Pine or down by Tinemaha and Aberdeen. Do… Read more »

Allen, Section IV.A of the LTWA contains the provisions that can provide the information that you are seeking: http://www.inyowater.org/documents/governing-documents/water-agreement/ Some folks I know and the DWP, who tend to forget and ignore the provisions, don’t think much of the LTWA . It was a great accomplishment by those whose shoulders… Read more »

Not getting into the Rancher/Cattle debate, but without the water on the valley floor… well… there are plenty of places that are not irrigated here, and I prefer the pasture sections. Sad to think what the Valley Floor is going to look like when the grass dies, one huge dust… Read more »

Maybe I can help better explain and put into perspective what the relationship the ranchers and the valley (the county) is. Without the ranchers irrigation there would no longer be any green in this valley except in very close proximity to flowing streams and the river. That means a severe… Read more »

come on sierra wave, what is in it for you to protect lacey. You dont think he can afford a little critisism? You do not hesitate to post prejudicial comments regarding CURRENT Pre-trial criminal proceedings that will no doubt cause the accused to have an unfair trial, yet you will… Read more »

Sierra Wave has a history of proclaiming somebody guilty, based on accusation only. They care less about a person’s reputation, and damage to their family and business, than they do hyping some lie for profit. How about the Wes Anderson lie, Sierra Wave?

Complete falsehood about “proclaiming somebody guilty.” We report the news, and especially news that our listeners and readers want, like accusations of embezzlement, etc. And I take offense, for myself and Benett, about “hyping some lie for profit.” Also, have no idea what you mean by the “Wes Anderson lie.”… Read more »

We’re not “protecting” just not posting your same comments over and over.

And as for your latest shot at the Inyo County Sheriff’s Department, that’s not getting posted either.

Am i missing something? Why should the county go to court and fight for the ranchers? If I have a business on LADWP land, and there is a breach of contract, will the county represent me? Or would that be an issue between myself and the LADWP?

Irrigation water applied to the Ranchers lands stays in the Owens Valley, benefits wildlife, and is a binding legal obligation as part of the LTWA. I don’t know the history well enough to say but it’s probable that there would be no LTWA without the Ranching Community . The relationship… Read more »

” By letter dated April 27, 2015, the Los Angeles Department of Water and Power (LADWP) notified each of it’s Ranch Lessees in the Owens Valley ,except for the irrigated lands in thee Bishop area and certain enhancement /mitigation projects, all irrigation in the Owens Valley will be discontinued effective… Read more »

Had to wash my truck on Sunday afternoon,but before I did,went by the local car wash to see if they are still in operation….sure enough,2 stalls being used.So I went back HOME to wash my truck,thinking if someone can make money off of others and using a LOT of water… Read more »

lowinyo- i think they otta throw you jail. your saying you are not going to comply with water restrictions because no one else does?

As a form of protest when I was I stayed in the Best Western on Main in Bishop this last weekend I left the water running in the sink for my entire stay.

Yes because wasting even more water is a great form of protesting. If you want to protest, don’t do it in such a sheepish way. Stand up and don’t be a coward about it. Wasting perfectly good water when others could use it in the safety of a hotel room… Read more »

Commercial car washes are required to collect water in a sump, filter and reuse it. They use high pressure rather than volume, which is more efficient. Overall they use less water per vehicle and filter out pollutants such as oil and soap (which home washing releases into the groundwater).

Water regulations recently enacted in Mammoth have banned all non-commercial car washing! ie you have to go to a car wash to get your car washed. I wonder about the carwash fundraisers that the kids do?

Sugar, it’s going to be an interesting summer in Mammoth. Stay tuned, I guarantee water conflicts all over town, pitting condos, homes, businesses, and neighbors against each other over their rights to wash their own vehicles and irrigate their “special projects”.

its another trick. The LADWP knows if they get the ranchers on their side “the good ol boys” they will have more pull. The only way to do that is to cut their water and get their attention.

Water reality grim for everyone. =

Soon hamburger will cost 25$ a Lb. at Vons and milk $7 a gallon and Loaf of Bread $4 a loaf, box of cerial $7 plus… and on and on. The Black Horse Prophesy in the Bible comes to fruition

Surprise! There are 8 billion people living on Earth. They all want to eat cheeseburgers. Except for the vegans — who are liers….

LADWP is amazing…water in short supply? get the locals sniping at each other…they play us like a stradivarius!

Heaven forbid they cutback on their water exportation!

Uhhh… how bout zero export since early April lasting until sometime in November? Maybe you’d like to re-read the last article about this subject and come back to this one.

sorry Seriously…. I must have missed that article, I did not realize that LADWP was stopping all exportation out of the owens valley until November. Can you provide me with the link to the article? so you’re saying all of LADWP’s wells will be turned off so the aquifer can… Read more »

Sugar, you are so right!

CalTrans in Socal needs the water to keep the freeway landscaping lush and green.

“What do people here value?” Rancher Noland asks after advocating to take water off pf Owens Lake. Well Tom, what people value is clean air, and taking water off of Owens Lake – something that will lead to bad air for thousands of people – so that a handful of… Read more »

Statewide, 80% of California’s available water supply is used for agricultural purposes. Much of this 80% is lost to evaporation from sprinklers, or becomes drained away as waste from field flooding (which creates further issues of toxic mineral & chemical concentrations). Moreover, much of California is in desert or semi-desert… Read more »

Your 80% figure clouds everything you posted after the lie.
You read that number on the LA Times and ran with it. I suppose it’s also possible you’re part of the green mis-information movement.

The number is closer to 30% and has been verified repeatedly.

I understand the logic behind the move to decrease the amount of water required for DWP for the Owens Lake Mitigation Project, however, I’m concerned about how that decision will affect future attempts, in good rain years, to get DWP to comply with court orders. Does a reduction move on… Read more »