By News Staff on May 2, 2012 in Government Agencies/Utilities 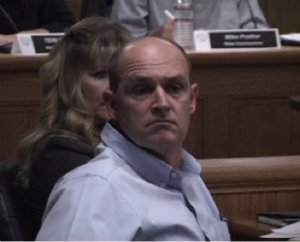 Inyo County officials call the Los Angeles Department of Water and Power’s proposed pumping plans for this year vague, uninformative and in violation of the Long Term Water Agreement.  Inyo has asked for changes, but will LADWP ignore those requests as usual?

Harrington also points out that monthly well field pumping rates add up to 93,000 acre feet not 88,000.  Harrington questions some of DWP’s other figures and calculations and disagrees with DWP’s complaint that it has had to use too much water on enhancement/ mitigation projects.

Harrington analyzes each well field based on the maximum DWP might pump since it’s unclear just how much LA will actually pump and manage the water.  In Laws, Harrington says DWP’s plans would cause declines in groundwater levels leaving them below baseline levels that LA was expected to reach long ago.

In Bishop, the Hillside Decree won by the Matlick family in the 30s demands that DWP not pump water for export, but DWP is complaining about water uses and losses there.

In Big Pine, water levels remain below the baseline and DWP’s maximum pumping proposal, Harrington says, would take the levels lower and well below baseline.  In nearby Taboose-Aberdeen it’s the same story – DWP pumping would take water tables lower and they remain below the baseline.  South of there at the Blackrock 94 area, further water table decline is predicted.  This area is already the subject of an in-depth evaluation for significant damage.  In the Independence area, maximum pumping would lower the water tables which are already below baseline.

Between Independence and Lone Pine, Harrington said proposed pumping would mean water table declines and the areas remain below baseline.  In Lone Pine, there are concerns about Well 416 which could impact private and tribal lands.

Parcels in most of the well-fields show a vegetation decline that has continued over the 20 years of operating the Long Term Water Agreement. Inyo and LADWP differences will be discussed at a May 9th Technical Group meeting.

Water drains from the valley naturally, but with all of the water being being moved by DWP in the fashion it is moved, and with ground water pumping, of course the vegetation is declining. The ground water pumping is what we need to be worried about, not letting DWP pump… Read more »

Daris, As far as I know the Inyo Water Dept, in cooperation with DWP is supposed to be monitoring vegetation. The ways and means were/are supposed to be defined by the Long Term Water Agreement and associated “Green Book”. I guess I also wonder what is going on with that… Read more »

JeanGenie The Green Book is being revised for I don’t know how long before but since I started attending meeting in 2008 the status of revisions is on most agendas. I have yet to see any progress be made other than more meetings and discussions. So more of the same… Read more »

Any person who is good with numbers or words can make them say almost anything. LADWP has lots of sharp employees who make up these charts and graphs that at first glance look good but when it gets down to the truth most of them are just smoke screens. The… Read more »

Who the heck does LADWP think they are anyways? Just like Caltrans, LADWP seems to just ignore their duties to the people of this state by thumbing their noses at the agreements they signed. This is what happens when you let a private entitiy take over essential needs. Greed comes… Read more »

Ex-Resident..Have to mention a story that happened in Lone Pine you might find kinda funny,and concerning LADWP…and your saying “who do they think they are?” We had a fire in town a few years back,a big one,that ended up burning 2 or three homes to the ground…totally out of control… Read more »

You don’t even know what you’re talking about ex resident. How about we fire you .. we’d be better off, than to listen to your rhetoric.

I don’t agree with what DWP is doing .. but it just irks me to read rhetoric such as what you posted, trying to bring others into your misery. Who are you going to slam next?

Why isn’t The Hillside Decree being upheld, does anyone know?
Thanks,

The Hillside Decree is being upheld thanks to Stan Matlick of Bishop who went back to court in the 80s to once more defend the 1938 decree. His attorney was Barrett McInerney, who successfully defended the decree against an attack by LADWP. In this year’s pumping proposal, LA was complaining… Read more »

So The Hillside Decree does not include the rest of the valley I take it?

The 1938 circumstances focused on what’s called the Bishop Cone which is a large area that goes north of Bishop, in Bishop and south nearly to Big Pine.
BK

Perhaps then Benett if the Hilltop Decree can stop DWP from pumping Bishop ground water then the same legal arguements can be made for a new decree to stop and protect the rest of the Owens Valley. For surely the ground water being pumped outside the Bishop Cone area is… Read more »

As I recall the Hillside Decree is more complex than that but I can’t recall off hand. Inyo County did have a groundwater ordinance which would have protected the rest of the Valley. 78% of Inyo voters approved it. DWP sued Inyo and Inyo caved in. Benett Kessler

This is ludicrous… why can’t the courts stop LADWP from destroying the valley and blatantly disregarding previous water agreements. They don’t have a right to ALL the water they want!

Inyo needs to fight DWP . Our property values and way of life is on the line.