By News Staff on September 25, 2015 in Government Agencies/Utilities

The moon will be putting on a show on Sunday. 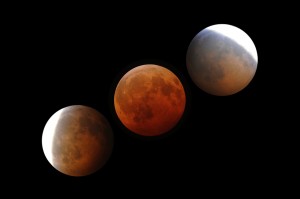 The big moon will then be eclipsed. Literally. To add some drama, during the full lunar eclipse, the moon will turn red, which earns it the title, “Blood Moon.” Shortly afterward, darkness will slide over the entire moon.

The stargazing public is invited to watch and learn about this intriguing celestrail event on Sunday, Sept. 27, at the Independence Creek Campground, one mile west of Independence. Knowledgeable volunteers and large telescopes will be on hand to guide the viewing and provide background information about the eclipse and other astrological items.

To catch the Blood Moon/Super Moon Total Lunar Eclipse, gather at the far end of the first campground out of Independence on Onion Valley road just before sunset, which should be around 6:30 p.m. You can use binoculars to see the Blood Moon and the eclipse, but those who want a closer look can peer into one of two 10-inch telescopes from the Eastern California Museum.

Be forewarned that the moon will not wait for you. It will start being covered by the Earth’s shadow fairly soon after rising, and then it should be in “full” eclipse around 7:30 p.m.

Parking is available near the viewing site. Bring binoculars, a chair, probably a jacket, a telescope if you have one, and some curiosity. Call 760-878-0258 for more information.

Here’s what you can expect to see, with naked eye, binoculars or the telescope.

The moon will be full, but it will look bigger and brighter than usual since it is in “lunar perigee,” which means it’s 30,000 miles closer to the earth than usual (it’s still 220,000 miles away).

The Earth will block the sun’s rays from hitting the moon, creating the lunar eclipse. The “shadow” will proceed across the moon in stages. Also, the moon will likely take on a red or coppery appearance, thus the “Blood Moon” moniker.

According to space.com, there have only been five super moon lunar eclipses in the last century, and the last one occurred in 1982. The next total lunar eclipse will occur in 2018.

Beginning in April 2014, there have been a series of four total lunar eclipses set six months apart, which is called a tetrad. We are lucky to see a tetrad, since there were none from 1600 to 1900.

I wish this could wait until Halloween! Cool stuff!

“Time and tide wait for no man.”

Google it… there’s some interesting history behind the phrase. But it would be perfect for Halloween.