By News Staff on May 8, 2014 in Government Agencies/Utilities

The following was forwarded by the Inyo County Sheriff’s Office: 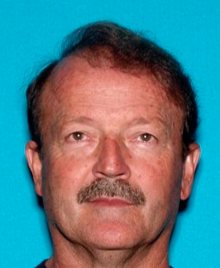 Orville (Moe) Fleming is a Battalion Chief for Cal-Fire and is currently wanted for murdering his girlfriend in Sacramento County on 5-1-2014. It is believed that Fleming has fled the immediate area in an unknown vehicle. He is an avid outdoorsman and frequents the Sierra Mountains, Santa Cruz Mountains and the Yosemite Valley. Fleming has keys to fire gates, trails and Cal-Fire facilities throughout the state, in his possession. Fleming should have cuts to one or both of his hands, injuries that he sustained during the murder that should require bandages. Fleming has been known in the past to change his appearance by shaving his head and mustache. Fleming should be considered armed and dangerous. He is known to have a .45 cal pistol and a .25 cal pistol that are unaccounted for.

We work to provide daily news to all of the Eastern Sierra, in the tradition of Eastern Sierra News Service and the Sierra Wave. We bring you daily happenings, local politics, crime, government dealings and fun stuff. Please contact us.
View all posts by News Staff →
Mono Assessor candidates talk issues
Live music and barbeque
7 Comments
Newest
Oldest Most Voted
Inline Feedbacks
View all comments

It would be helpful for the public if law enforcement would provide an image of what Mr. Fleming might look like when he’s shaved.

Hmmm. How does someone in a responsible position of leadership such as a battalion chief fall so low as to murder a girlfriend? One would think the personal qualities that lead you to succeed professionally would moderate against one resorting to violence in their personal life. How sad.

From hero to fugitive, he’ll turn up sooner or later

He’s probably hiding out somewhere on Forest Service or BLM land. Check the backside of Grant lake or the back side of the Glass mountains. Never going to find him on the highway.

Here you go Mono County sheriffs, a real bad guy to be on the lookout for. Hope you’re not hiding behind bushes if this guy makes it in to Mono County. This is where actually patrolling our county (not just one highway that’s already well covered by the CHP) might… Read more »

I hope they ARE hiding somewhere so they are in position and prepared to apprehend this guy if he makes it to Inyo or Mono County. Why does it seem so many have completely failed to understand the job of law enforcement? How is law enforcement expected to do their… Read more »

We’re on the same page Tinner, I want them to patrol the COUNTY.

Currently they are only patrolling the highways, which are a very small part of Mono County and already being patrolled by the CHP.