At approximately noon today the Inyo County Special Enforcement Detail, which is made up of Sheriff’s Deputies, Bishop Police Department and tactical medics of the Olancha Fire Department, responded to an anonymous tip that Richard Farrell Andreas Jr., was “hiding out” in a residence in Lone Pine. Andreas was wanted for felony battery and parole violation, and was considered armed and dangerous. 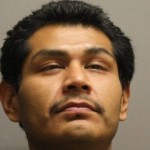 After a three-hour standoff, which included extensive negotiation efforts, pepper-balls were utilized which are a non-lethal projectile weapon made up of a powdered chemical that irritates the eyes and nose.

Andreas was located hiding in the attic, under the insulation; officers arrested Andreas without further incident. Andreas will be held at the Inyo County Jail on the following: parole violation, parole warrant for assault with a deadly weapon; Inyo County warrant for battery with serious bodily injury, trespassing, vandalism, and theft; and resisting arrest.

In addition to the members of the Special Enforcement Detail, the Inyo County Sheriff’s Office would like to thank CHP, Bishop Police Department, Lone Pine Volunteer Fire, and Olancha Volunteer Fire, for assisting.

Since the whole valley knew this dude was a wanted “parolee at large”, they should have arrested whoever was hiding him for harboring a violent fugitive, RIGHT ?

Rick…My guess would be,in order for the harboring charge to stand,it would have to be if LE asked the residents of the home IF he was inside….and then if they said no,and found him there on a search warrant,maybe….Someone could always say they knew nothing of him being wanted…

Yeah, someone that doesn’t have a tv, radio, internet, or read the local paper, AND, someone that’s NOT related to him.

Rick O’Brien….Yeah….BUT…..still something that would be all but impossible to prove in a court of law….How do they say it,”getting into someone else’s mind” ??

No TV in this household. Until this article I could have bumped into this dude and never known there was any reason to worry about him. Was there an APB for him in the local papers or on any radio station? Not that I am aware of.

You haven’t missed anything by not having a TV. I’d get rid of mine if I could.

I’m a little skeptical when my friends come over and start picking out the windows and hiding in the attack. Just saying.

Sorry about my spelling there.

blulexus…Your “summation” of the incident sounds about right !!!….and I think what worries me the most when these type(or any type) of things seem to happen around here. CHP flying by at 90+ MPH…..Sheriff’s Dept. doing the same.In this case,include BPD,unmarked LE vehicles,Olancha FD,LPFD,an armored vehicle.It actually surprises me it… Read more »

Don’t forget about the article in the Sierra Wav spouting off about a coordinated multi-agency response where everyone gets a pat on the back.

Complete with a reply from SL stating CERT was deployed for traffic control.

What in the world does CERT doing traffic control for certain special events in Mammoth have anything to do with this story?

Mark-It’s not so much the pat-on-the-back thing that worries me.Not so much the multi-agency thing either,at least with this one.Maybe more so how it’s done,and who it sometimes includes that have no authority at all over anyone,or training what-so-ever to be speeding around the town and an area and-or trying… Read more »

So let me guess… They will let him out tomorrow or next week after his court date with a promise to appear just like the last time and the time before that…. This legal system is for the birds, barbie houses, make believe, movies, tv shows, etc… Hey maybe the… Read more »

Is this related to the big multi-agency high speed chase in Big Pine about the same time today? Or was that a separate incident?