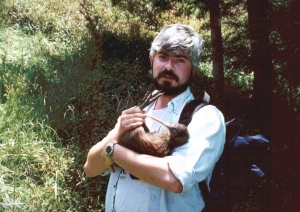 Dr. Skinner has accomplished major research in genetics and has walked across Iceland, Great Britain and America to raise awareness for cancer relief and hospice.

Dr. Colin Skinner of England has walked thousands of miles to raise awareness and money for hospice.  His current journey started in North Dakota, and he plans to end it in San Francisco.  Weather and conditions as he snowshoed through Yosemite caused him to rest a bit in the Eastern Sierra.

On Saturday, the Mono County Sheriff Search and Rescue (SAR) Team responded to help the cross country walker.  Colin Skinner, 46, from Walmer, England, has been on a walk from North Dakota to San Francisco in support of the National Hospice Foundation.  Last week, he walked through Bishop and visited the local hospice there.  While snowshoeing across the Sierra through Yosemite National Park, he had problems with wet clothing and frostbitten feet, and contacted Yosemite rangers at their winter cabin.

The Search and Rescue Team was dispatched on Saturday at approximately 6:00 PM and began planning the rescue.  Two members went up Hwy 120 West with snowmobiles to scout the conditions.  On Sunday morning, the Team drove snowmobiles to the Park entrance station, where Mr. Skinner had been moved by Yosemite rangers, and transported him down to the waiting Mono County Paramedics, who transported him to Mammoth Hospital for treatment.

Skinner planned to spend a few days in Mammoth Lakes before continuing his journey.  According to the National Hospice Foundation, Skinner’s walk is a repeat of his 1988 journey chronicled in a book entitled “Beyond the Setting Sun.”  By April of this year, Skinner hopes to have walked over 12,000 miles since 1988 to encourage support for hospice. Skinner is quoted as saying that “Hospices are there to help people with serious illness, but hospices need help too in the form of volunteers and support from their local communities.”

Skinner is walking the miles in memory of his mother who died from pancreatic cancer at the age of 59.  Check out his blog at www.nationalhospicefoundation.org/colin.