After two weeks of walking, from Saddleback Lake to the Bishop Paiute Tribe’s Cultural Center, roughly two dozen hearty souls and their mission, elevating awareness of water issues both globally and in California, were hosted to a meal and a panel discussion Thursday evening. 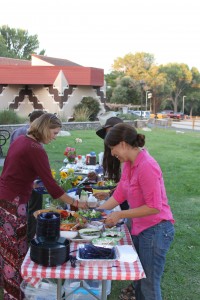 Activists from Europe to South Africa as well as Inyo and Mono County locals began their Walking Water trek August 31, scheduled to reach Owens Lake by September 22. Activist Kate Bunney is described as the visionary behind Walking Waters in the project’s press release. Bunney was introduced to the Owens Valley in 2012 by Gigi Coyle of Big Pine who, with Alan Bacock, has turned the vision into actual boots on the ground. “One day as I was walking along Tinnemaha Creek I could suddenly see pilgrimage: the image, sound, smell, movement of the group of people with the intent to bring awareness to the long-standing and conflicted issue of water in California and the world,” the press release states. Bunney described Walking Water as a prayer.

Panelists Bacock, coordinator of the Big Pine Paiute Tribe’s water program, and Teri Red Owl, Inyo County Water Commission member, used examples of Native Americans’ relationship with their environment as a blueprint for a possible future. “Before the 1850s, we used water and the land differently,” said Bacock. The Owens Valley Paiute culture was unique to the valley. “There was a synergy with the environment,” he said. “We learned not to take everything for own benefit. There was a realization that what we took, we had to give something back. (The idea of laws and ownership) of natural resources is not sustainable. As we go forward we have to look back at the indigenous people.”

Bacock noted the concept of “climate control” with the goal of human comfort. “We’ve put comfort above the environment. With the drought and climate change, we’re not adapting. We have to be soft and adapt, not hard and fighting.”

“We look at water all wrong,” said Red Owl. “You’re taking control of what you should respect. We need to watch what we’re doing with the water, how we’re treating what is the life for future generations. We have to get the water where it is used.”

Harry Williams and Daniel Pritchard were tougher in their comments with Williams describing Los Angeles as “an ugly monster.” Williams described the network of canals throughout the valley, built by Native Americans for irrigation, before settlers came into the valley in the 1850s. Pritchard’s solution to the valley’s water issues is “to help Los Angeles overcome its addiction to water…. They have to recycle, reclaim and fix their pipes.”

Los Angeles Department of Water and Power gave permission for Walking Water to access City land in the valley and was represented at the buffet/discussion by spokesperson Amanda Parsons. “Los Angeles today uses the same amount of water it did 40 years ago, despite a population increase of one million people,” Parsons said in a statement after the Cultural Center event. “The City’s conservation numbers overall are some of the best in the nation for a large city. We’re on track to cut purchased water imports 50 percent by 2025, thanks to local L.A.-based water efforts like San Fernando Valley groundwater cleanup, increased water recycling and storm water capture. Los Angeles’ water system leak rate is half the national average. Currently, the City of Angeles experiences just 3.5 percent water loss each year from ‘real losses’ which include firefighting and other uses, as well as water leaks from pipes. LADWP appreciates and values Walking Water’s efforts to bring about harmony surrounding the region’s water issues. We celebrate their efforts and wish them a safe pilgrimage. I encourage everyone with questions regarding our operations in the Owens Valley and in Los Angeles to reach out to me. I can be emailed at [email protected]”

The Walking Water pilgrimage will reach Big Pine this Sunday and begin the final week’s walk to Owens Lake on Monday. Community members can join the pilgrimage Saturday and Sunday, September 19 and 20, east of the Owens River and north of Lone Pine. The closing ceremony will take place at 9 a.m. Tuesday, September 22 near Owens Lake followed by a celebration at the Owens Valley Growers’ Cooperative in Independence that evening.

This leg of Walking Water is just the beginning of a three-year project that will take future walkers from Owens Lake to Los Angeles.