By News Staff on January 15, 2014 in Government Agencies/Utilities 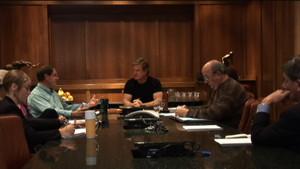 The meeting began with Dan Holler giving updates on town staffing, zoning codes, airport service, and development impact fees. After Holler was done presenting the town’s agenda items, number one on that agenda being the need for some snowfall, Rusty Gregory discussed with the committee what was going on up at Mammoth Mountain. Rusty began by praising the effort’s of the snowmakers and the job that they have done under the current conditions, he then boasted about the four portals (Eagle, Canyon, The Mill, and Main Lodge) being open, the number of trails available, and having the most open terrain in California.  Then, in a surprisingly candid moment, he dropped the company line and equated having the most open terrain in California to,  “being the tallest man in a midget contest.” After the room had a chuckle he quickly added, “without casting aspersions on short people.” To which Mayor Rick Wood replied, “Thank you.”

The first thing that the committee wanted to know was the impact of this season’s low snowfall on revenue and operations. According to Gregory the Mountain has brought in “20% less revenue and 28% fewer visitors so far (than they had planned) and that’s trending worse from here.” He then briefly spoke of the company’s “General Plan” to develop Mammoth Mountain into a, “full blown resort community,” and not being so reliant on snowfall for economic stability.  “In the meantime,” said Gregory, “we are very reliant, not just as a company but as a community, on snowfall in terms of visitation and revenue.”  However, Gregory was optimistic about the economic boost that will come with the upcoming U.S. Snowboarding Grand Prix (January 16th-19th) and MLK weekend.

The next subject was June Mountain operations and both the committee and press had plenty of questions because, as Ron Cohen would come to say, “June Mountain has more rumors than snow.” Here is a fact: “June is off about 58% of its budget of having 60,000 skiers a year.” Once again Gregory praised the efforts of the snowmakers and all of their hard work and spoke of the great experiences families were having at June (kids ski free!). He then broke the news that they had to shut down Chair 7 and now they only have Chairs 1 and 2 running. Rick Wood then asked,if June Mountain were out of water?  Rusty tiptoed around an answer eventually saying, “As long as we have good temperatures, we will continue to make snow.” He continued by saying that, “We would like to see more business than we are doing but it is just a reflection that there is no natural snow out there.”

When asked about June Mountain possibly shutting down, the Mammoth Mountain CEO made it clear that they intend to keep everything, “open as long as Mother Nature allows.”  In response to the rumors about the impending shut down of Canyon and Eagle Lodges, he stated that, “unlike June we have a lot of water here.”  The meeting then closed with Rusty Gregory remarking that, “Before we have to make any tough decisions about Canyon, Eagle, or June,  we hope Mother Nature steps in and it becomes obvious what it is we should do, which is go powder skiing. “

I thought Rusty went away?

what a joke ,watching rusty and all the rusty yes men,i threw up a little in my mouth,those meetings need some real locals in them to give a down to earth view and ideas

Money is the only local. The more money — the more local — the louder the voice.

The people who do the dirty work don’t have a voice and never will as long as they keep working for pennies.

Ignacio, Just a bit too connected to the truth for the comfort of some. The Dee-wap had an opportunity to educate a generation of Angelenos with Governor’s Brown’s Dec of Drought but they have failed with resigning leadership, maybe not a fair critique, so what else can be expected who… Read more »

Truth be told, most of that water probably does not make it back to the aquifer and everyone on the planet should be more conscious of water use.

Rant cont. Shucks Phillip… There be one lawn down here that I drive by every day that uses 3,000,000 gallons of water a year. (@ 30 GPSF/yr.) That lawn be about half the size of a city block. Taint no way you can tell me lawns aint a big ole… Read more »

California Gov. Jerry Brown on Friday declared a drought emergency for the state, saying it is facing “perhaps the worst drought that California has ever seen since records (began) about 100 years ago.”

Ken’s post gets a thumbs down? Really? Temperaments up here are even worse than the drought.

Begin Rant: The people of Los Angeles are oblivious to the artificial nature of their existence. New lawns keep going in while the old ones are watered in “devil may care” fashion. Meanwhile in the O-valley… Half the Oh-inyos are outraged while the other loyal half is damn grateful to… Read more »

What if it stays dry for the rest of the Winter?

What if is dry again next year???

Go ahead and complete your thought Mr. Warner.

I’ve already said everything I have to say about diversifying the economy of the East Side. People don’t seem to like the idea of not being snow farmers. They also don’t like the idea that brick and mortar retail stores are competing with the internet and losing. MMSA could be… Read more »

Friends of nothing
Reply to  Ken Warner

Great idea Ken, there IS all kinds of things we can do…

But good luck with all those professional environmental agencies though – they hate the idea of turning the west side into a recreational paradise. Nothing is sustainable anymore, don’t cha know?

Lock it up and let it burn!