The public is invited to wade into the middle of the Lower Owens River and soak up the latest developments and information about the massive river restoration project. 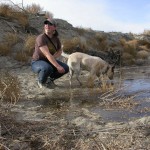 Phoebe Prather and Jake greet the first trickle of water in the Lower Owens River in November of 2006, when water was returned to the formerly dry streambed. Note the tumbleweeds, dead trees and bone dry riverbed. Today, water has brought new life to 62 miles of the Lower Owens River. Photo by Mike Prather.

The field trip is being led by Leigh Parmenter and Katie Quinlan, the principles of the Eastern Sierra Watershed Project, which is part of the Eastern Sierra Institute for Collaborative Education. Parmenter and Quinlan have been collecting data and leading groups of students into the river corridor since before the Los Angeles Department of Water and Power re-watered the Lower Owens River in 2006. Since then, they have continued to document the changes that have taken place in the newly re-watered stretches of the river.

Thus, they have a unique perspective on how the river restoration effort has progressed.

The field trip will take participants in and around the river as they explore the various aspects of the “new” river. The trip will take place on Saturday October 26, and will go from 9 a.m. to 4 p.m. Participants don’t have to stay for the entire day. Please bring a lunch and plenty of water, and wear comfortable walking shoes, and bring enough warm clothes for an unpredictable fall day.

And they weren’t kidding about “wading into” the river. Participants can get in the water and help with data collection. Don’t worry: hip waders will be provided (or you can bring your own), said Quinlan. This is a great chance to get knee-deep in a river research and educational program.

The field trip is free and open to the public, but the organizers would like to be able to plan the various activities, so they are asking people to call in advance. To sign up for the event, call the   EasternCaliforniaMuseum at 760-878-0258.

The group will meet in the parking area at the junction Aberdeen Station Road and U.S. 395, between Independence and Big Pine, at 9 a.m. Those wishing to carpool from Bishop can send an email to [email protected].

The field trip will immerse participants in the following trio of significant developments and issues surrounding the ambitious river restoration and revitalization project, according to Quinlan and Parmenter.

** Animal Sign: Learn how to identify sign left behind by the animals that live along the river. If we are lucky we may see mink, elk, lizards or many birds that now frequent the wetland areas along the river.

** Native Plant Walk and Soil Investigation: Soil is the key to plant life. We will look at what makes one soil different from another and how soil determines which plant communities can survive. We will also look at how the vegetation has changed since the re-watering of the river and learn some unique facts about the native plants living along the Lower Owens River.

** Stream channel changes: Has the river channel changed since the water was released in 2006?  Put on some waders (provided) and climb into the river to measure the shape of the channel.  Climb back out on to the riverbank to compare this year’s channel shape to how the channel looked prior to the reintroduction of water.

The effort to bring life back to 62 river miles of the Lower Owens River began in November 2006, when LADWP released 40 cfs of water back into the river channel. That flow level has been maintained ever since and has been supplemented by higher flows in the spring that attempt to mimic higher water flows from spring runoff. The stretch river from the LA Aqueduct Intake south dried up in 1913 when the river’s flow was diverted into the Aqueduct.

The LORP field trip is sponsored by the EasternCaliforniaMuseum and the Metabolic Studio.

So I just finished posting this under an article in the LA Times describing the 100th Anniversary of the LA Aquaduct.: “For the other side of this story, one may wish to follow a website called The Sierra Wave, the website of an eastern Sierra Nevada radio station and news… Read more »