By News Staff on June 13, 2013 in Government Agencies/Utilities 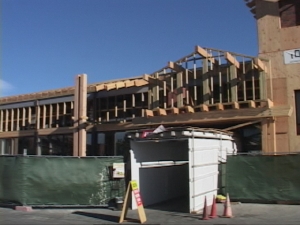 For some it’s kind of disorienting – the construction at the Vons Mammoth Lakes store. The two entrances are now plywood tunnels out into the parking lot, designed to protect shoppers. Inside, things have been moved, making way for a new floor plan. Vons Manager Rick Graham says construction is on schedule.

The complete store make-over, including the exterior, started more than a month ago and is slated for completion this summer. Starbucks and the Vons Pharmacy have moved to the expanded area inside Minaret Mall. More seating was also designed for this same area.

Vons Real Estate Vice President Brian Braaten had told Sierra Wave that the changes and expansion would also “breathe new life into the mall area.” He said these changes have been a long time coming. Renovation of the current store is also underway with the new space created by the relocation of the Pharmacy and Starbucks.

Braaten had said the deli would expand and other changes would be made inside the store. Manager Graham said the changes are evolving and the project is more than half-way finished and on schedule. He has overseen a lot of moves inside the store and expects more items and a better customer experience.

Graham summed it up when he said, “This is a huge change!” Vons will invest some $4.5 million in this project. The work on the exterior, according to Braaten, will look similar to Vons stores in Lake Tahoe and Bend, Oregon. He had told us at the start of the project that “When tourists visit and leave, they will take away a better impression.”

Geez, can we all be a little more crabby and insular? And let’s not kid ourselves – this town lives and dies by its tourists. There are other options for locals, they just take a little more effort.

Can we just stop it already with the “poor us” locals mentality?

Having the understanding that when one chooses to live in a remote area, far from the lunacy of the city, the cost of shipping food and keeping it as fresh as possible results in a higher unit cost. I thought EVERYBODY knew that! These people simply are having a problem… Read more »

Sierra Lady
Reply to  A no-brainer

^ Agreed! It’s the price we pay for being residents in this little slice of paradise. It’s definitely been a “shopping adventure” the past few months, but I like to look on the positive side. Just think how much nicer the store will look when the construction is completed, plus… Read more »

Mammoth continues to get better and better.
And those who inhabit Mammoth are the absolute best!
(But I wish the powers that be would stop letting the rest of the world know about our “little slice of paradise.”)

Mark
Reply to  A no-brainer

Nothing in California is remote.

They charge more for no other reason then they can

Bemused
Reply to  A no-brainer

“When tourists visit and leave, they will take away a better impression.” What about the locals that support this Vons year round?! We don’t need a better impression! We need isles that aren’t clogged with cardboard displays and a zillion end caps that block the walkways filled with people and… Read more »

Unbelievable ! I’ve been taking my bizzz to Sierra Sundance during this Mess. I would rather pay extra for quality food than give my hard earned dollars to The crooks at Vons !!!

vons is the biggest rip off ive seen,ralphs is pretty bad too,the town truly needs a staters and trader joes

The Owens Valley is much too small a market for a TJs. Inyo County has 18.5K people and Mono County has another 14.2K people. TJs isn’t locating a store anyplace that only has 33K people, especially when those 33K people have low median income. Their demographic is higher income and… Read more »

It’s good to know the over priced food that we pay is going.