By Charles James on May 21, 2020 in Bureaucrat Beat, General 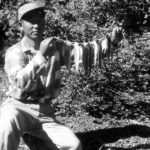 The mountain streams full of trout held the promise of freedom

May is Pacific American Heritage Month and in honor of that Manzanar National Historic Site will be hosting its annual “Manzanar Fishing Club” lecture and screening online this year because of the restrictions imposed by the coronavirus pandemic and the state’s Stay-At-Home order.

Cory Shiozaki, the director and producer of the documentary told Sierra Wave that, “We look forward to this event every year. We’ve been doing this for almost a decade, but because of the restrictions on bringing people together in one place, we decided to work with the Manzanar park rangers to find an alternative way to a safer way to provide the program this year.” 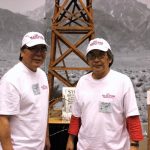 Cory Shiozaki and Richard Imamura are the Special Virtual Guests

The program is scheduled for Saturday, May 23, at 11 a.m. and it will feature the screening of a 29-minute shortened version of the award-winning documentary, “Manzanar Fishing Club.” The film will be followed by a live question-and-answer session with Shiozaki, screenwriter Richard Imamura and director of photography Michael Nakamura. There will also be a special appearance by former Manzanar incarceree Danny Hashimoto, the son of legendary Terminal Island fisherman Amos Hashimoto. (See flyer at bottom of article.)

As with most events the past few months, the event will be on the Zoom platform and limited to the first 100 participant that sign ups. Reserve a spot by RSVP’ing to the email address: [email protected].

“The Manzanar Fishing Club” is set during the removal of Japanese Americans (two-thirds of whom were native-born citizens) from their homes on the Pacific Coast and subsequent incarceration in ten “relocation centers” (prison camps) spread throughout the United State west of the Mississippi River. Manzanar, the first of the camps and best known of all the camps, went into service on April 1942 and eventually, over the next three-and-a-half years housed over 10,000 internees behind barbed-wire fences, watchtowers, and armed guards.

The film follows the stories of a number of incarceree as they snuck out under cover of darkness, through barbed-wire fence and then out of the camp to fish for trout in the surrounding streams and mountain lakes to enjoy a brief taste of freedom from the camp.

One Response to Virtual Zoom Event: RSVP Now! Preview of Manzanar Fishing Club on Saturday, May 23