The following is a press release from PlayBig Entertainment.

It was one of the biggest and sexiest nights for the 12th Annual Latin Grammy Awards. Held Thursday evening, October 10th 2011, at the Mandalay Bay Hotel and Casino in Las Vegas.

It was a star studded evening that brought in superstars for a music event that would dazzle the Latin entertainment world.

Univision televised the show and was the second most viewed among 18-34 year-old adults for their time slot, out performing CBS, NBC, FOX and CW.

Singer/Songwriter Violeta Martin, from Mammoth Lakes CA, lit up the green carpet as she wowed the fans with her presence!

Miss Martin wore a stunning gown that had her as one of the sexiest artists walking the green carpet, listas.20minutos.es has her in the top 5 by online votes. The dress was an exclusive design by Adolfo Sanchez. She even caught the eye of 1970’s heartthrob and current TV dancing sensation, Erik Estrada finalist on MQB. When we asked Miss Martin about Erik Estrada, she said, “He’s charming, handsome, very very charismatic.”

Miss Martin also spoke about how exciting it was to hear her name being chanted by all the fans in the galley. “I really felt all the love. It was very emotional for me. But all the excitement came when I got mobbed in the lobby at Mandalay Bay by fans. I have never experienced that. My manager had to call security in to get me out.” Violeta Martin will be performing at House of Blues in Los Angeles, Friday November 18th 2011. You can follow Violeta Martin on www.facebook.com/violetamartinoffical. 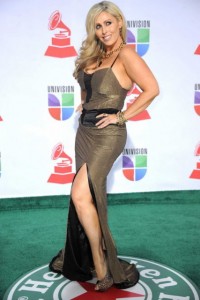 Make sure y’all come on over to the Footloose Parking Lot on Friday, December 2! Violeta will be keeping the crowd at the Official Town Tree Lighting Ceremony warm and toasty with her favorite holiday songs! Program will start at 5:30 p.m.!

You go Violeta!!! you looked Beautiful!